The Landscape of Old Lyme

The horizon line rises and falls with clusters of trees and grassy areas strewn with boulders along the way.

Behind the hills in the panel would be the Lieutenant River, that joins the Connecticut River before it flows into the waters of Long Island Sound.

For its relatively modest size (Old Lyme is only 27 square miles), the area is almost unsurpassed in its topographical variety. Moving from the shore to the uplands, Lyme is a network of low lying tidal estuaries surrounded by salt meadows that rises to rolling farm fields and rocky upheavals topped by deep shadowed forests.

The distinctive qualities of the Lyme region began nearly 300 million years when the ancient continents of North America, Africa, and Eurasia smashed into one another, forming Pangea (a hypothetical supercontinent containing all the earth’s landmasses), literally crushing Connecticut into a series of hills and valleys that run north and south. In fact, a part of the land originally attached to Africa is connected to Connecticut with the ancient fault line falling under the Connecticut River between Deep River and Lyme. The last ice age also played a role in shaping the area by covering the region with a mile-thick glacier of ice. It gouged and deepened the valleys as it advanced and left boulders, gravel, and sand as it melted.

The Lyme side of the river was inhabited by English settlers, beginning in 1645 when a tract of land was given to Matthew Griswold. Twenty years later it was established as a township with its own minister and thirty families in residence. For the next two hundred years the area would thrive with small farms, boat building, and small mills along the many waterways .

In the years after the Civil War changes in shipbuilding technologies caused the population of Lyme to drop drastically, allowing the region to settle into a quiet village surrounded by small farms and light industry. This was the place the artists found thrilling to discover. 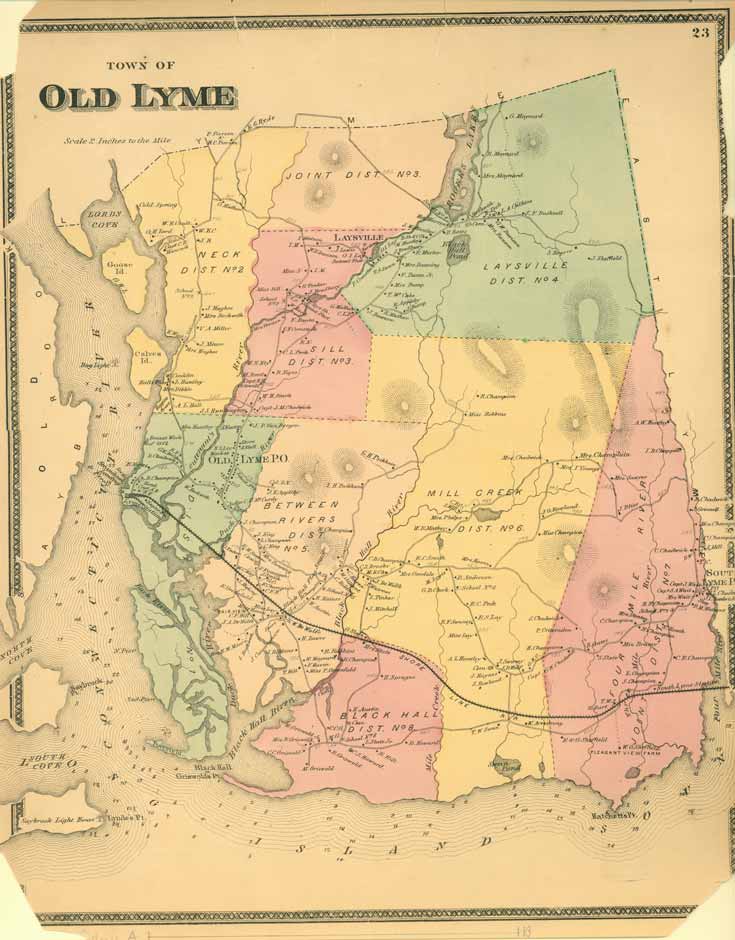 By the 1890s Old Lyme was reachable by a combination of rail and ferry.

The village became a country retreat, buffered by marshes to the south and rolling farmland and forest to the north. Its one constant and defining feature was an impressively varied landscape that combined meadows, marshes, ancient trees, and winding rivers with old New England buildings, homely dirt roads, and well-worked farmlands. A landscape steeped in historical associations and nostalgia, Old Lyme was a place “only waiting to be painted,” as one of the artists boasted.