The cow painter William Henry Howe is seated on his folding stool with his back to the viewer in The Fox Chase. He stops painting long enough to watch the race in pursuit.

The fact that Howe’s friends referred to his paintings as “Howe’s Cows” sums up his main artistic focus. Howe trained as an animal painter in Paris beginning in 1881 and continued to paint cattle for the rest of his life. 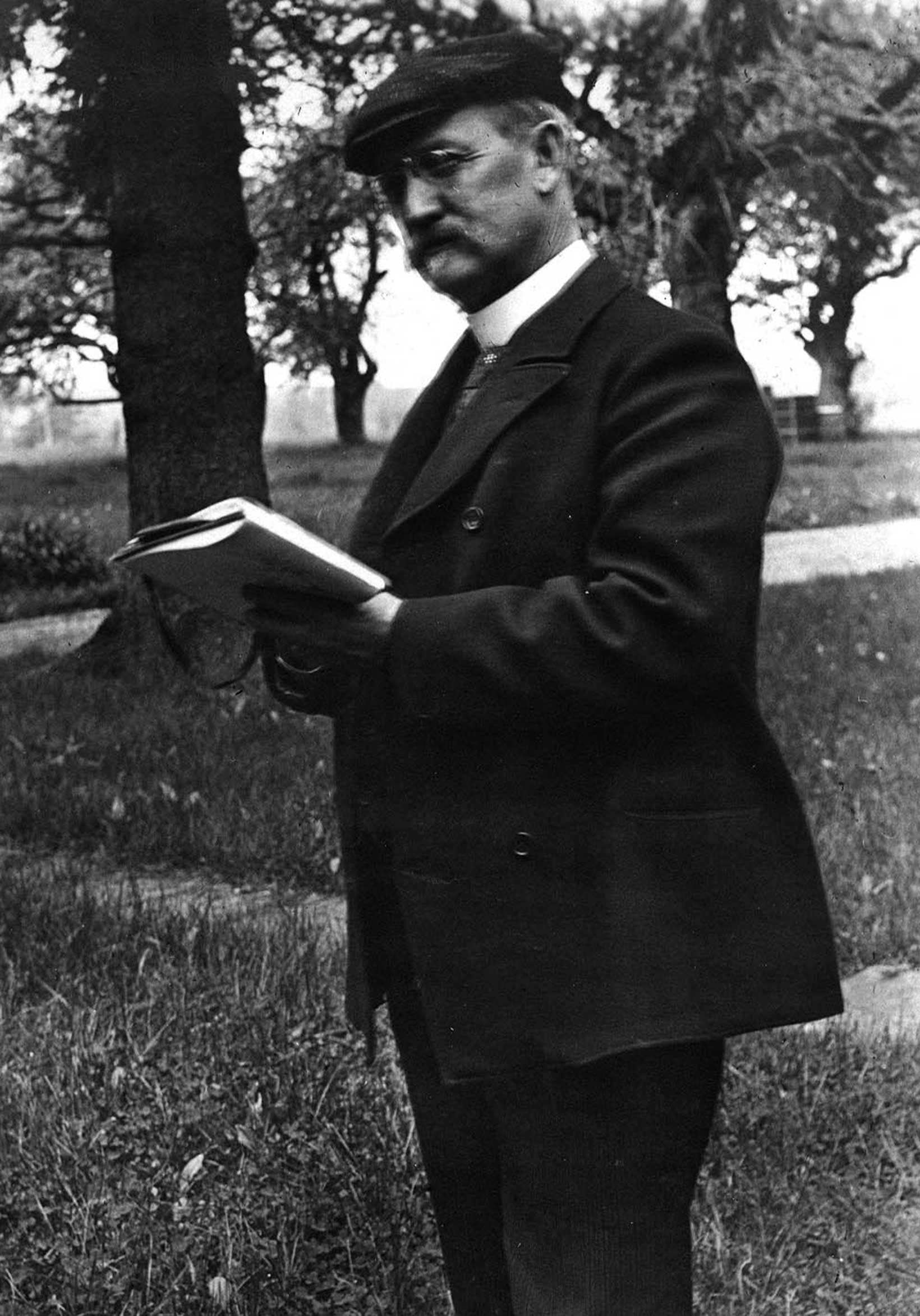 His interest in painting cows was perfectly suited to Henry Ward Ranger’s invitation to join him in the country to stay at the Griswold boardinghouse. He and his wife boarded with Miss Florence that first summer and many summers thereafter. Being one of the first artists to board with Miss Florence, he was able to paint on one of the coveted doors in her parlor. Filling two panels of the door (as if seen through a window), he painted Normandy Bull (Monarch of the Farm) (1901), a regally reclining cow in a stable filled with golden light.

According to one observer: “In appearance, he dressed like a minister down to the black shoes which he wore even in the field, but there was always a five cent cigar underway.”

He was called “Uncle” by most of the younger artists and eventually encouraged his nephew Will Howe Foote, also an artist, to join him at the art colony. They both had studios in one of the barns across the road from the boardinghouse. Because of his age and great knowledge of animals, he was given the task of carving the meat at the dining room table. One evening, the younger artists hid a ring that Howe had lost at the beach inside a fish knowing he would find it while carving.

He was stunned when he heard the metallic clink of the ring against his knife. After a few moments of thinking this was the same fish that had swallowed his ring he became wise to the prank. Despite his love for painting animals, Howe chose to paint boats on the door leading from the dining room. 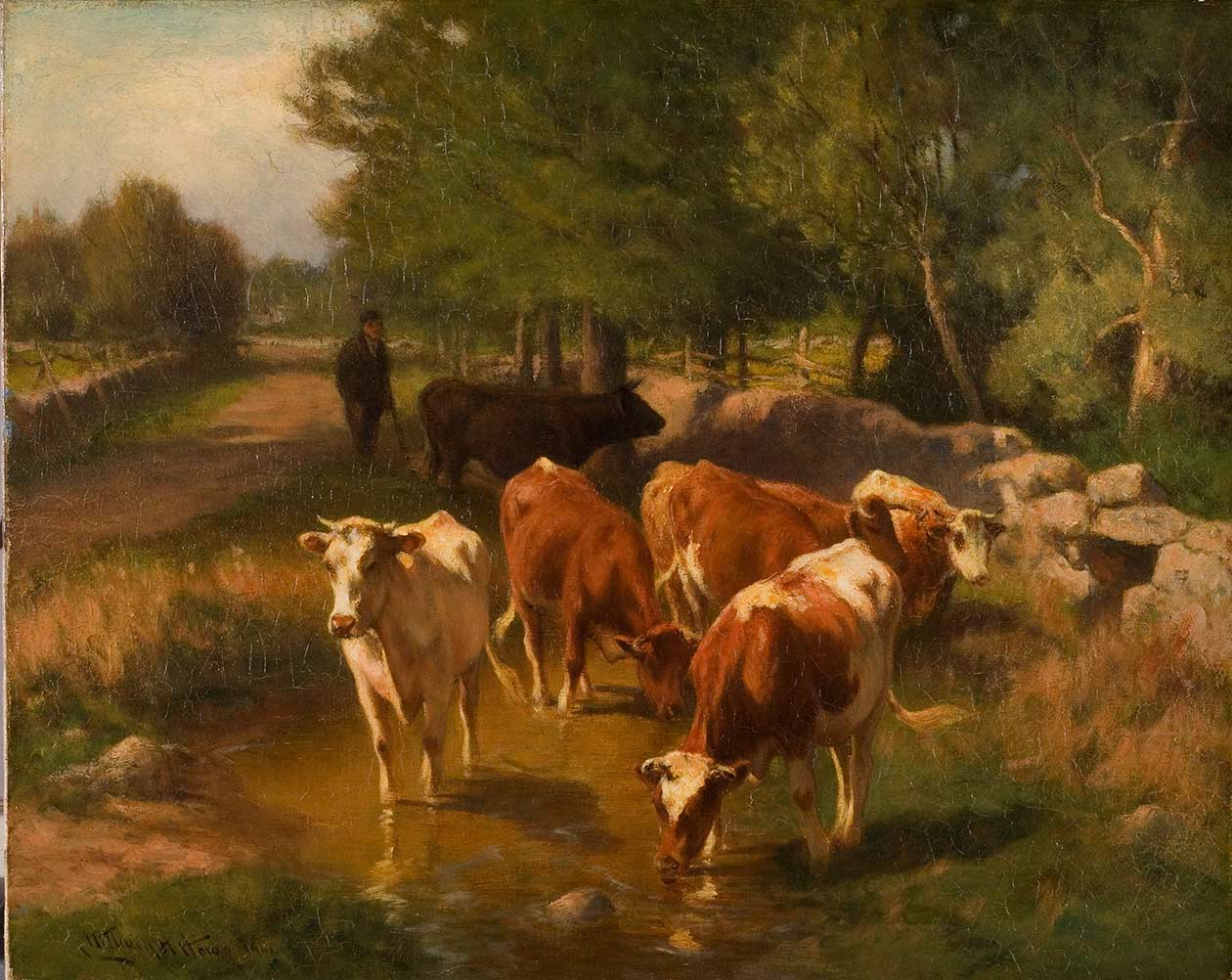 During the early years of the art colony, Howe’s paintings sold well and his work was accepted into the collections of several museums.

He participated yearly in the end of the season exhibitions held at the library or later in the galleries of the Lyme Art Association and his paintings of cattle always received great praise. One reviewer wrote, “but his cows are not cows. They are Herculean animals with massive legs and corn-fattened bodies . . . and no one would ever think of calling one of them ‘bossie’.”

According to his biographer at the famed Salmagundi Club in New York, “His paintings were honest transcripts from nature, faithfully cooked up from many studies and sketches from objective observations, however he knew his cattle so well that France decorated him with the [Cross of the] Legion of Honor.” Nevertheless, as the 20th century pressed on, he sold less and less. In a letter to Florence Griswold in 1918 he laments, “I am blue as indigo. Have done nothing in the way of sales this winter and have no prospects.”

Howe was not merely one of the artists to appear in The Fox Chase, but also somewhat of an uninvited collaborator. After Howe’s dog Weeksie (also on the panel) died, Howe asked Poore to paint a rock over him, claiming the image of the dog made him too sad to eat. He also scratched out the face of fellow artist George H. Bogert with a penknife after learning he allegedly did not pay his board bill. Fortunately for Bogert, the original artist Henry Rankin Poore painted his face back in years later.