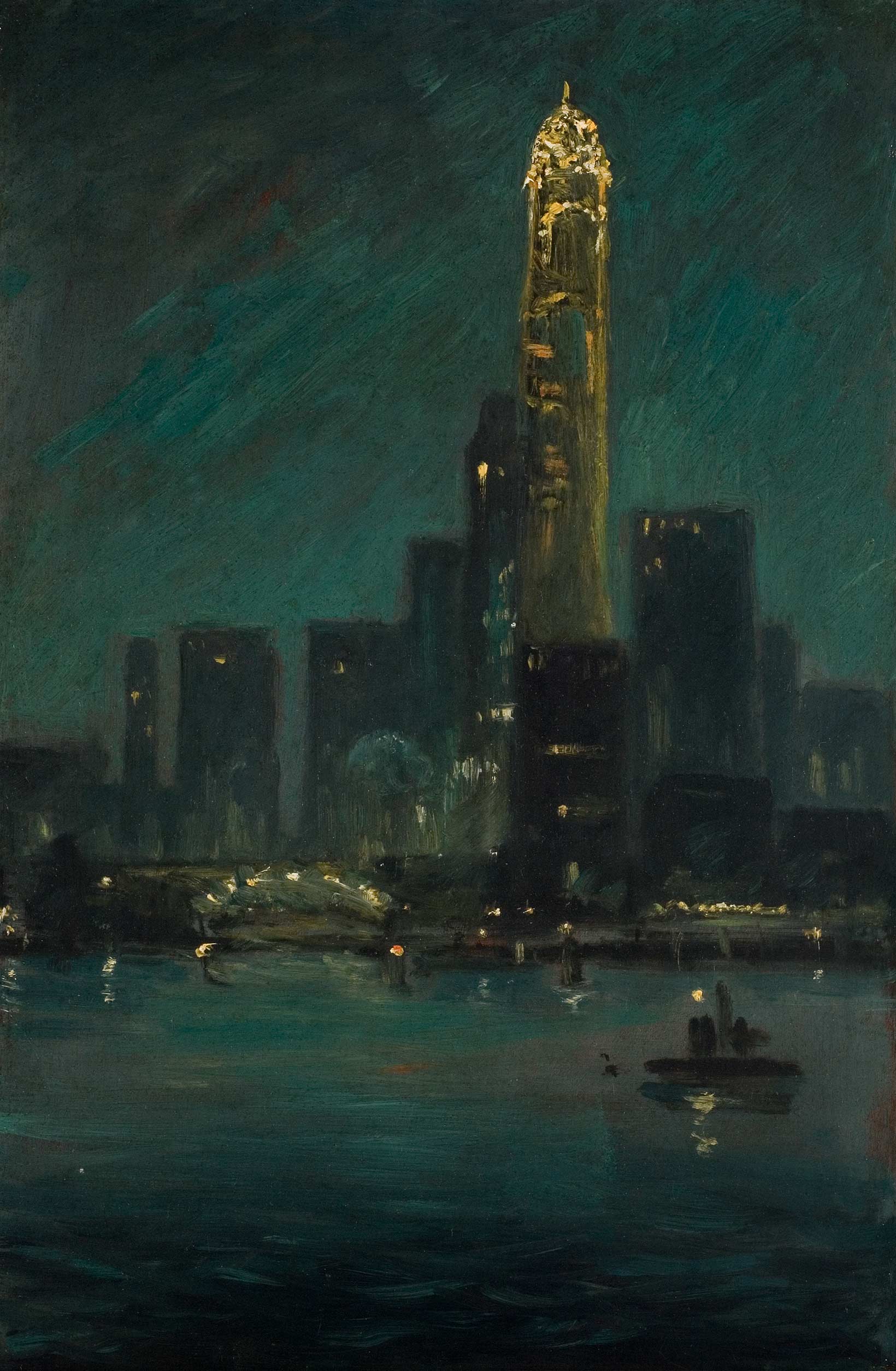 Evening Skyline from the Water

Soaring above its neighbors in 1908 was Manhattan’s brand new skyscraper, the 41-story Singer Building, portrayed here by Charles Vezin, known for his misty views of the New York skyline and harbors. Home of the Singer Sewing Machine Company, this building rose 612 feet at Broadway and Liberty Street and was for one year the tallest in the world (Metropolitan Life’s building on East 23rd reached 700 feet in 1909). Nonetheless, the Singer Building, an elegant Beaux-Arts tower with an unusual bulbous top that was illuminated nightly for years, remained one of the city’s best-known landmarks until 1967, when it became the tallest structure ever to be demolished. Vezin painted its image by 1914, when his panel appeared in a photograph of the Griswold House dining room in the magazine Country Life in America.

Vezin created a romantic scene, by countering the various blues and violets of the water with echoing tones in the sky, by using the shadowy rectangles of buildings to stage the “main event,” and by having the Singer Building itself, heralded by lights on bridges or docks below, soar like a golden rocket to culminate in a blaze of light. The slight bend of the shaft, seen against the rigid gray forms of the other buildings and the blue envelope of water and sky, give the Singer a sense of energy and movement.

Ernest Flagg, architect of the building, had strong feelings about skyscrapers. He denounced those that were being built because they covered every bit of land, and he wanted all new ones to occupy just one quarter of their sites, so that all their sides could be treated architecturally and, more importantly, that New York would be “a city of towers” rather than of “dismal ravines.” No one listened – although a few years later city zoning laws did at least favor staggered setbacks. By the time the Singer Building was completed, the 34-story City Investing Building, ran plum up against its north side, as Vezin shows.

Vezin, a Pennsylvania Military Academy graduate, had been a traveling salesman until 1895, when he founded a drygoods firm in New York. Four years later, at 41 years old, he took his first art lessons — at the Art Students League, where his teachers included future Old Lyme artists Frank DuMond and George Bruestle. By 1902, Vezin, still a full-time businessman, had been elected to membership in the Salmagundi Club, a prestigious art club. He became its president from 1911 to 1915 and was a president as well of the Brooklyn Art Association. By 1909 he had had work in nine successive exhibitions at the National Academy of Design, and he was exhibiting with the Lyme Art Association. In 1919, at the age of 61, Vezin ended his lucrative business career and devoted himself to plein-air painting, which he happily pursued in Old Lyme, on a 300-acre farm he owned, and in Coral Gables, Florida.

Although in his early years he castigated the Metropolitan Museum of Art for exhibiting Impressionist paintings, Vezin’s Whistleresque images of New York City were often called Impressionistic by critics. Then, after he began to paint en plein air in Old Lyme, Impressionism’s bright light and color, and sometimes even its loose brushwork, became embedded in his landscape views, as in The Old Garden, a painting in the collection of the Florence Griswold Museum.