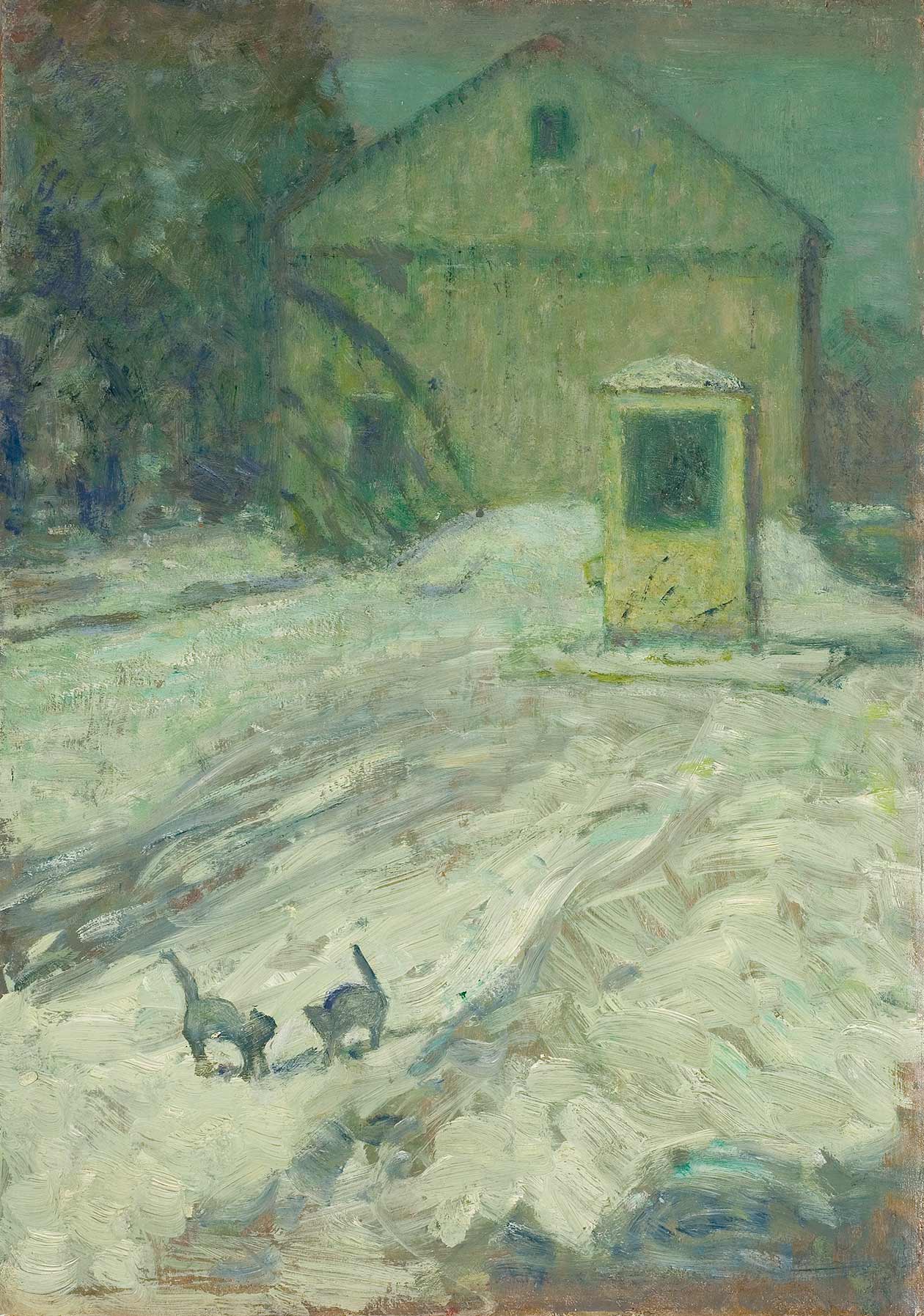 Kittens in the Snow

Gregory Smith chose to paint a scene on his panel for the dining room that would be recognizable to every artist who ever stayed at the Griswold House and is, moreover, seen today by every visitor to the Florence Griswold Museum. The view is from the back of the house to the well housing and one of the barns (reconstructed now as the Hartman Education Center). Smith first came to town in 1910 and settled year-round in 1916, yet even then often stayed in the Griswold House in winter while his wife took their children to Florida. Most other Old Lyme colonists did not experience snow in Old Lyme. Nor today, in an age of paved walkways and snowblowers, will wintertime visitors see an exact copy of this view. Smith would have painted this scene comfortably from inside the house, most likely through the window from the back bedroom (now the Orientation Gallery). The few artists who painted in Old Lyme in winter or inclement weather often wanted a portable studio that was moved by oxen or horse from place to place.

Odd is the tree in the upper left, seemingly still full of leaves — much too green for either an early fall or late spring snow. Nevertheless, the snow, looking shoveled, packed down, swept aside, or even drifted in places, seems no longer entirely fresh and new, but that does not diminish the effectiveness of the scene. The eye is led to the buildings by diagonal brushstrokes that play against the simple geometry and verticality of the buildings. In turn, the structures’ yellow-green colors, raked with strong shadows, complement and set off the contrasting texture and tones of the snow, which covers nearly two-thirds of the image. Still, the buildings are a strong attraction and might win the battle for “control” if not for the kittens at lower left. They ground the scene by insistently attracting the eye. By means of silhouettes, Smith conveys how tentatively cats put their paws into something wet and at such moments arch their backs and raise their tails. Miss Florence usually had so many cats and kittens about the place that Smith may well have had to make a deliberate choice to portray only two.

A Michigan native drawn to Connecticut by the Lyme Art Colony

Smith, who came to Old Lyme at the suggestion of his friend Will Howe Foote, a fellow native of Grand Rapids, Michigan, was especially drawn to the work of Willard Metcalf, who a few years earlier had attained success with images of the Old Lyme landscape. Metcalf’s interest in moonlight scenes and winter landscapes influenced Smith to make these his specialty. Though never as commercially successful as other Lyme colonists,

Smith was highly regarded by the group and won several awards at the Lyme Art Association, which he served as president for more than 20 years. He was active in the town’s volunteer fire department and in local politics, he was unfailingly jovial, witty, and caring, and he was of considerable comfort to Florence Griswold in her last difficult years. Indeed, he was one of the few people at her bedside when she died during the early days of December in 1937.