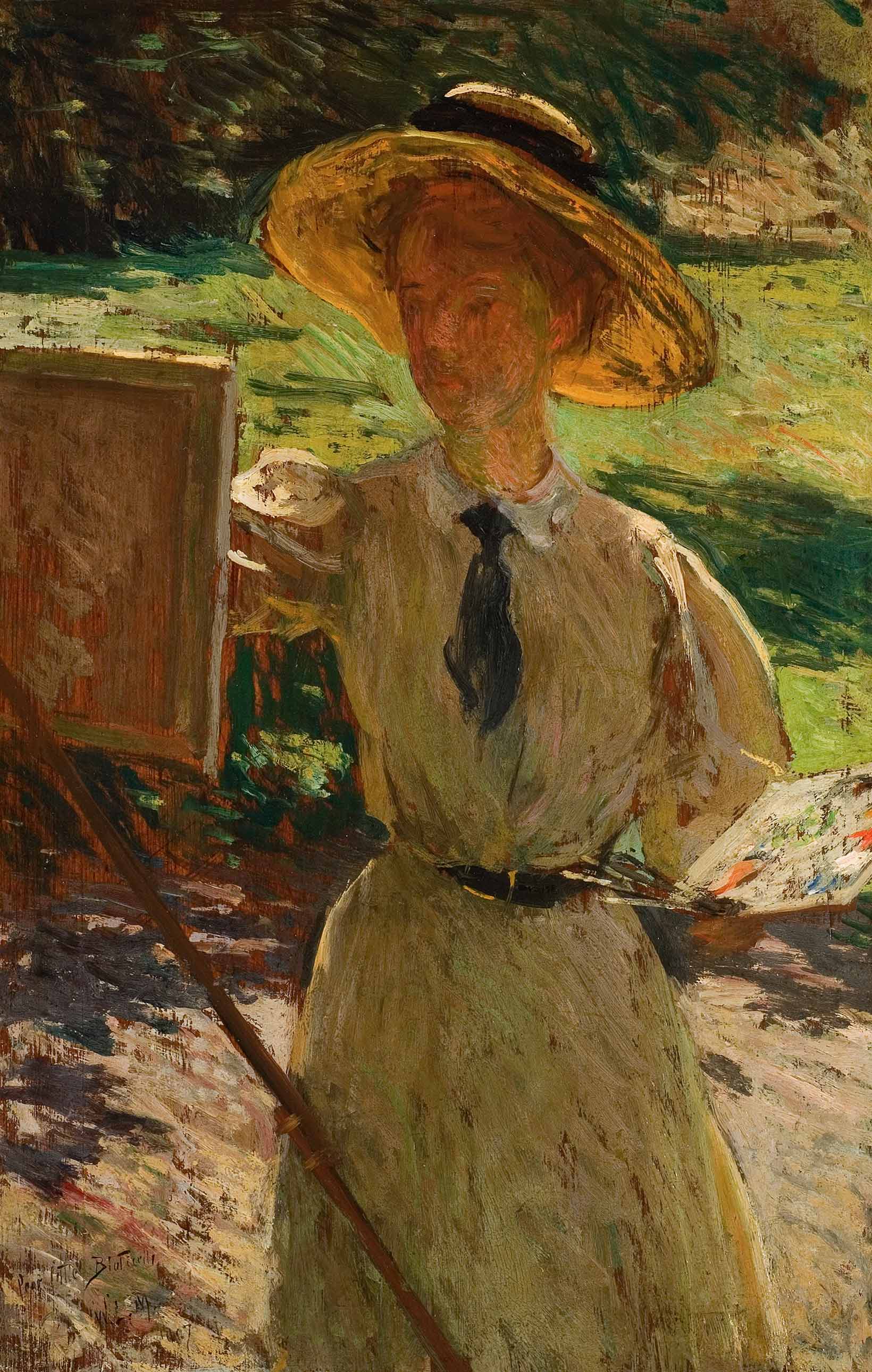 Poor Little Bloticelli portrays Willard Metcalf’s 15-year-old student, Lois Wilcox, who had come to Old Lyme to study with him and with Frank DuMond. Hard at work in her no-nonsense painting outfit, she offers an interesting contrast to the fashionable lady of leisure portrayed by Alonzo Kimball on a panel nearby.

Metcalf may actually have thought well of Wilcox, for he painted her as a young woman who faced her canvas with confidence.

Perhaps he chose to do little more than hint at her features because he wanted to depict a type of woman artist rather than a particular woman. Noteworthy here are Metcalf’s treatment of light and shade, the many color tones, and the animated brushwork that together convey a sense of the energy this artist is putting into her work. Note the bits of orange color that seem to be dripping off the young lady’s brush or canvas like a sign of her zeal.

As a mere student she was not allowed to stay in the house, but it would surely not have surprised her. Women were studying art in large numbers in the late 19th century, but professional artists generally regarded all art students and amateurs as annoying “blots.” Women students were especially troublesome because there were suddenly so many of them and because it was assumed their “careers” would end when they married. Many male art teachers had no qualms about charging women more than men and teaching them less. Lois Wilcox, however, already knew about artists and art colonies. She had grown up in Tryon, North Carolina, where an art colony had developed in the 1890s. She was an active member.

Lois Wilcox went on to have an active career, juggling roles as a painter, lithographer, cartoonist, craftsperson, teacher, and writer. She continued her studies at the Boston Museum School with Philip Hale and studied privately with Charles Hawthorne. In 1913 she had a solo exhibition at the Detroit Institute of Arts. In the 1920s she exhibited at the Whitney Museum of American Art and studied with Galemberti and Venturini-Papari in Italy. (There she probably saw Sandro Botticelli’s – the source for the pun Bloticelli – famous Venus, painted in about 1485.) She also participated in many national exhibitions of lithography, including Fifty Prints of the Year in 1939. From 1933 to 1946 she taught drawing and painting at Sweetbriar College in Virginia. She also excelled at bridge, acting, singing, playing piano, and public speaking. Not bad for a blot.