Robert departed New York for London on December 11, 1843. On his previous outward voyage in August, the Toronto faced strong westerly gales that caused them to beat in the English Channel for fifteen days, delaying their arrival in London, according to crew member Charles P. Low (1824–1913). Ever conscious of the weeks it would take her letters to reach Robert, Helen sent him news of their daughter Louise and also of his family in Black Hall. Pointedly remarking that another packet ship captain would soon take his wife on a voyage to London, Helen wrote that she was discouraged about being married to a husband rarely at home and imagined herself a girl again. She also asked Robert to bring from New York window soap and lamp candles.

This is the third letter I have written you and I shall probably write two more ere I can hear from you, how long the time will seem, the two weeks since you sailed

Robert wrote to Helen on December 10, 1843, saying his ship would sail the next day.
New-York Daily Tribune, December 4, 1843 appears an age, I have not been out at all, but intend to soon, as I have nearly recovered from my cold, the weather has been very mild for the last week and we have had a number of calls, and yesterday Fanny

Robert’s niece Fanny Rogers Griswold (1822-1877) married in 1842 Lyme physician Shubael Fitch Bartlett (1811-1849). Two years later the Bartletts became Helen’s neighbors when they built a home on today’s Lyme Street based on drawings from a book of cottage plans by architect and landscape designer Andrew J. Downing (1815-1852).
Dr. Shubael Bartlett house, shown ca. 1880. LHSA spent the day with me very pleasantly, still I have not regained my spirits, in fact I never felt more sad, but I must go out again as soon as possible and endeavor to overcome my bad feelings. You cannot imagine dearest how our dear little Louise Helen and Robert’s first child Louise Augusta Griswold (1841-1896) was nearing her second birthday improves in every thing, her cheeks are a beautiful colour all the time, and her hair is getting thick and dark, if she continues healthy you will find her still more lovely at your return. They are all well at Black Hall

The section of Lyme called Black Hall, a point of land between the Connecticut River and Long Island Sound, was Robert’s birthplace and had been the home of the Griswold family for nearly two centuries.
1850 map showing Black Hall section and completed railroad line. LHSA , I have not been down, but Phoebe

Capt. William Griswold (1804-1851), Robert’s brother, commanded the N. L. & G. Griswold ship Panama that engaged in the lucrative tea trade with China after the Opium War (1839-1842) opened Chinese ports to foreign merchants.
Henry Colton Shumway, William F. Griswold, 1831. Watercolor on ivory. Courtesy of Griswold Family Archives they said could not write anything with regard to his prospects as he had not arrived at Canton

After China’s defeat in the Opium War, the Treaty of Nanking in 1842 opened Canton and other ports to foreign trade. Samuel Russell (1789-1862) from Middletown, who founded in Canton what became the largest and most prosperous American trading firm in China, began his career at the Griswold family firm Hull & Griswold in New York. The Canton firm Russell & Co., with whom Robert’s brother Capt. William F. Griswold (1804-1851) traded, dealt in tea, silks, porcelain and, to a lesser degree, opium.
Thomas Allom, Home of a Canton merchant, 1843 , Roger Roger Griswold (1824-1901), son of Capt. A. H. Griswold (1789-1836) and Robert’s nephew, accompanied his Uncle William on the Pacific voyage, which pleased his widowed mother Elizabeth Lansdale Griswold (1795-1848).’s letter was written in fine spirits, he was pleased with his voyage, and said he should continue going to sea, which of course was very satisfactory news to his Mother, 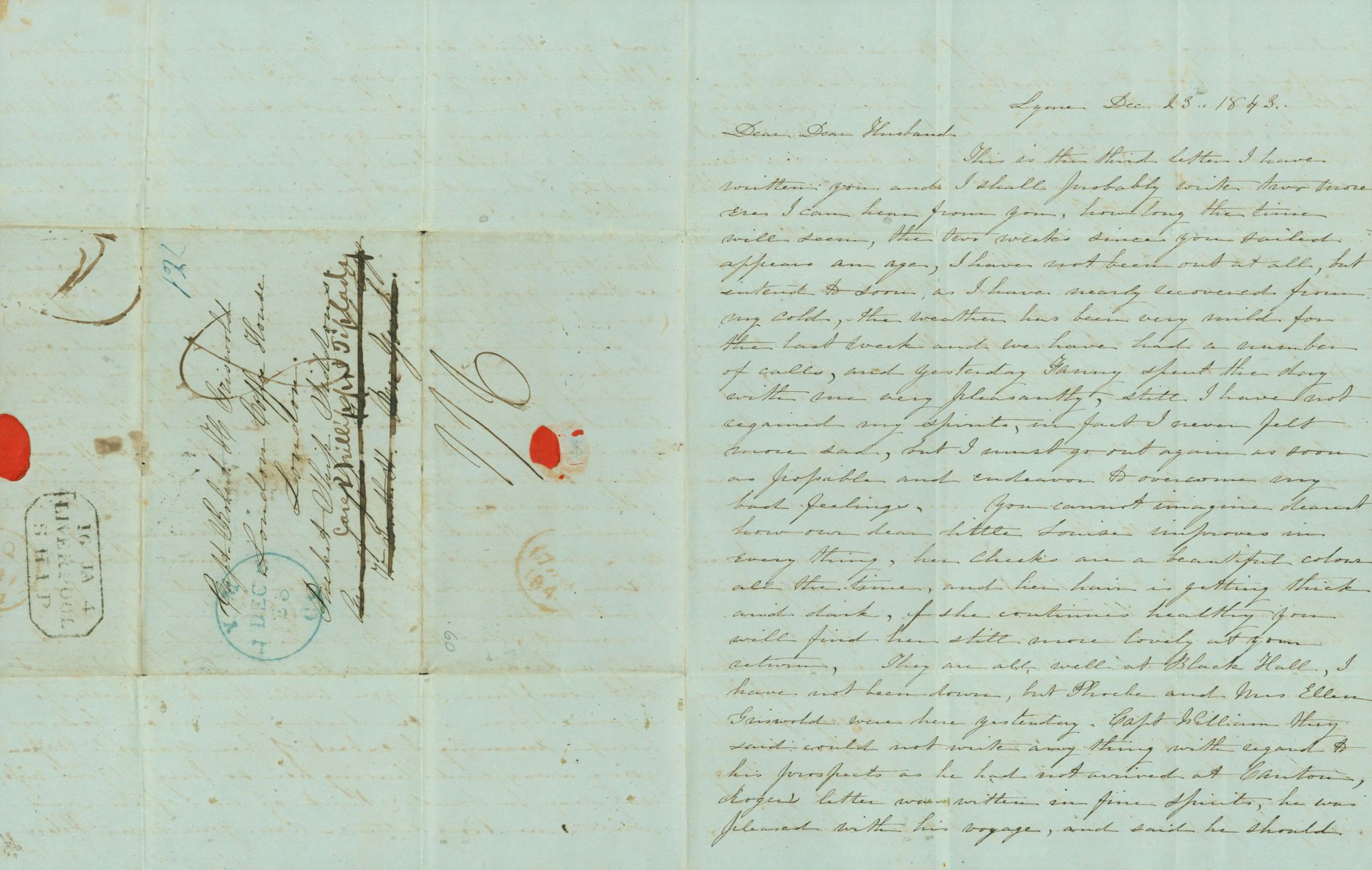 you ask me if I recollect Charles Duryea Charles Duryea (1827-1876) was apparently a fellow passenger when Helen, newly married, accompanied Robert on a voyage to London in 1841. ? Indeed I do, be sure and remember me to him and tell him that when he and I left the Ship the two best fellows were missing, by the by — I might tell something with regard to Mr. Duryea, but knowing you do not like my writing you things of that sort, and supposing you likely to ridicule me, I shall therefore keep it to myself, there is something for your curiosity to puzzle over my dear, You did not write me from New York Robert whether there was any thing more said or done about a new ship

The ship Northumberland, Robert’s next command, launched in 1844.
Image: Samuel Walters, The Northumberland, 1847. Florence Griswold Museum, Gift in Honor of the Centennial, Donated by Mr. William E.S. Griswold, Jr., 1997.19 , I was in hopes they would if it was only that I might have you with me a month or two longer, indeed I am quite discouraged with the idea of being married, and yet never allowed the society of my husband, no wonder if I should forget occasionally and imagine myself a girl again, which you have accused me of being guilty of, I have sufficient however at present to remind me that I understand that Capt. Howe

Capt. George W. Howe commanded the packet ship Emerald for the Havre-Whitlock line. The Emerald sailed from Havre on April 19, 1844, and arrived in New York on May 30. This is likely the voyage on which his wife accompanied him.
Letter, originating in Germany and mailed to Kentucky, carried on the Emerald’s return voyage in 1840
takes his wife out with him next voyage, I should think he would dread it, as she will probably be sick all the passage, how different from me Robert if I could go, I might possibly be a comfort to my husband, don’t you think so dear? yes, and a torment too, I think I hear you say — but do not allow it to trouble you, as it is not at all probable I shall ever accompany you again,

but do not think me ill natured dear, if I did not love my husband devotedly I should not be so anxious to have him with me, I believe I mentioned to you Robert that I should like you to get me a couple of waists Blouses worn by women and girls, called shirtwaists, were usually made at home by Lyme women in the 1840s but could also be purchased ready-made in New York, where the garment industry employed immigrant women and children in often dangerous and crowded working conditions., one of them large enough for Louise as those you purchased for her she has out grown (and I can appropriate them to some other use) I should like also another Box of Window Soap, as we have already used what you brought, and if you please you can get more of those Candles for the Lamps, recollect dear that you requested me to write you if I thought of any thing that was wanting, so I am only obeying your commands you know, Oh Robert, how much I think of you, and dream of you too, last night I thought you came home, and I came to the door to meet you, and you were glad to see me, how happy I was for the moment, but then to waken and find it only a dream was too, too hard; but I must not complain or you will think me cross again I fear — our darling Lou is in bed and asleep, dreaming I expect of her naughty papa going away and leaving her so long, good night, my dear husband; think of me often, and write me long letters

— Ever your own Helen

Read the Letters | Explore the Timeline | Learn About the Letter Notations