Nothing More American: Immigration, Sanctuary, and Community An Exhibition by Matthew Leifheit 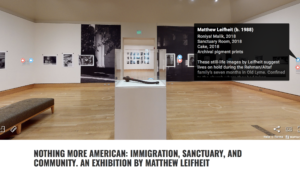 Click here to take a virtual tour of the exhibition, with information in both English and Spanish…

The exhibition was chosen as one of the 12 of the best exhibitions in New England this Spring.
Read article…

The white clapboard meetinghouse with its towering steeple is an icon of New England’s architecture and art, appearing often in paintings and photographs that depict it at the heart of the region’s small towns. “Nothing More American” brings together depictions of Old Lyme’s renowned First Congregational Church by 19th– and early-20th-century painters such as Childe Hassam with photographs by contemporary artist Matthew Leifheit that contemplate the meetinghouse’s evolving symbolism.

In summer 2018, The New Yorker published an article by Dave Eggers with photographs by Matthew Leifheit of a Pakistani family that sought refuge from deportation May through October 2018 in the First Congregational Church of Old Lyme (https://www.newyorker.com/news/daily-comment/no-one-is-safer-no-one-is-served.) Leifheit shot portraits of immigrants Malik Naveed bin Rehman, his wife Zahida Altaf, and their daughter Roniya, an American citizen. This exhibition will present Leifheit’s portraits of the family taken inside the church, while also expanding the series with new work that will consider the intersection between the fraught topic of immigration and the history of the Old Lyme church as an icon in American art. Once a symbol of New England colonists’ pious ambition to establish a new society, the “meetinghouse” merged religion, government, and community into a powerful civic ideal that prevailed for two centuries. As depicted by Leifheit, the Old Lyme meetinghouse is both ark and prison, sheltering and confining a family hoping to partake in that American ideal. Leifheit’s photos will evoke what it was like for the family during their months inside the church, creating images of their living spaces, the art they made while there, and the people from the congregation who helped them. Leifheit’s photos of the church’s neoclassical spaces and architectural details encourage us to approach it with reverence as a sanctuary, as well as with a sense of history. Since the family’s departure, another individual has sought sanctuary in the building, which will also factor into Leifheit’s photography.

Leifheit’s photographs often contemplate the relationship between architecture and people (https://www.matthewleifheit.com). Now his images join a long line of artistic responses to Old Lyme’s First Congregational Church, a building whose classical form incorporates pediments, columns, and Ionic capitals reminiscent of a Greek temple. Designed by Samuel Belcher in 1817 in acknowledgment of that classical building form as channeled through British architect Christopher Wren, the Old Lyme meetinghouse and those like it around New England became the preferred architectural type for American institutions during the early republic. Burned in 1907 and rebuilt in facsimile in 1910, the Old Lyme meetinghouse first inspired painters such as the American Impressionist Childe Hassam while visiting the art colony based at Florence Griswold’s boardinghouse in town. Hassam’s church paintings became synonymous with the Lyme Art Colony, and the building became a significant motif for visiting artists in search of a subject that could represent the essence of New England. Early-20th-century paintings of the church’s white clapboard walls and towering steeple celebrated New England heritage, a key impulse during the era’s Colonial Revival movement. In his many paintings of the church, Hassam often struck this note, promoting his pride in his Anglo-Saxon ancestry. During this time, the attitude Hassam held as an American whose family could claim generations of ancestors in this country often corresponded with resistance to growing immigration by non-Anglo-Saxon populations, whose potential for assimilation was questioned.

This exhibition envisions presenting Leifheit’s photos in conjunction with traditional paintings of the Old Lyme church and similar meetinghouses drawn from the Museum’s permanent collection, with selected loans. The title, Nothing More American, comes from artist Lorado Taft’s description of Hassam’s painting Church at Old Lyme as “nothing more American on all the continent,” a sentiment that resonates both with the historic image of the church and with the relationship of immigration to the American dream. Traditional paintings and contemporary photographs hanging together in the galleries will allow the exploration of questions of nationality and identity through media ranging from portraits to landscapes across the century.

“As depicted by Leifheit, the Old Lyme meetinghouse is both ark and prison, sheltering and confining a family hoping to partake in the American dream,” notes Curator Amy Kurtz Lansing. “’Nothing More American’ is sure to spark conversation and debate and we will make every effort to present the topic and its themes with sensitivity to all viewpoints.” In order to provide an outlet for varying perspectives to be shared, the Museum will provide a talkback wall where visitors can respond to some of the central questions posed in the exhibition. “We do not expect to create consensus,” says Kurtz Lansing, “but we willingly embrace the challenge of creating a space for a positive and productive discussion of the issues raised by the exhibition.” 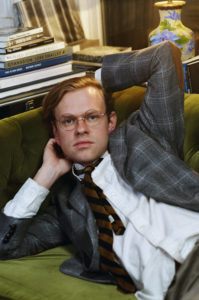 Leifheit is Editor-in-Chief of MATTE Magazine, an independent journal of emerging photography founded in 2010, and was formerly photo editor of VICE Magazine. He holds a BFA from
the Rhode Island School of Design and an MFA from the Yale School of Art, where he was awarded the Richard Benson Prize in 2017. Leifheit has taught at Pratt, Yale, School of Visual Arts, Parsons, and the National YoungArts Foundation. His work has been exhibited internationally and is held in public collections such as the International Center of Photography, the Museum of Modern Art Library, and Yale’s Beinecke Rare Book & Manuscript Library. “Nothing More American” is his first solo museum exhibition.