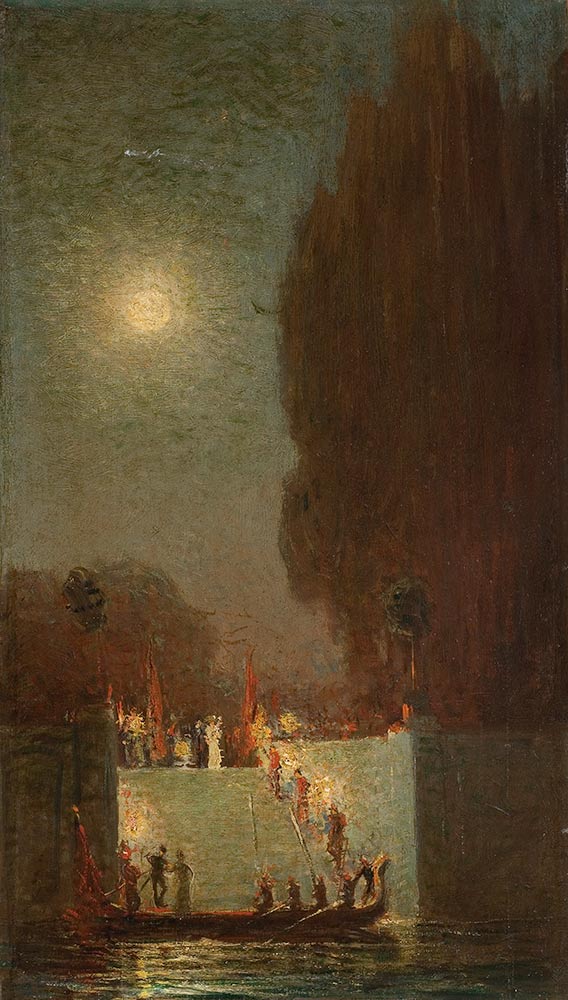 Robert Nisbet’s Venetian scene is a striking contrast to the many panels in the Griswold House dining room that portray the landscape of Old Lyme or other bucolic places – and, indeed, it is a departure from the kind of painting Nisbet himself was known for.  He had been to Europe, perhaps even seen Venice, but at Old Lyme, and later in Kent, Connecticut, he depicted the local landscape, imbuing it with sunlight and a strong sense of place.  His exotic Venetian scene looks more theatrical than real. The design, however, makes good use of a challenging vertical format that is almost twice as high as it is wide.

The richly textured moonlit sky on the left side and dark trees on the right are heavily atmospheric, creating a mood that enhances the sense of mystery in the scene below. A gondola has come to an elaborate dock. Its occupants are disembarking to join elegantly dressed people who have apparently gathered for a fête, as the orange flags imply. We see it all from a distance, can make out little detail, and are mostly affected by the lighting, only some of which can be attributed to the full moon. One can almost hear the music that would surely accompany such a scene. Fellow art colonist George Bogert also was a fan of Venice. The Museum owns one of his renderings of that city draped in mist done in tones of blue.

The prodigy from RISD

A prodigy who entered the Rhode Island School of Design when he was only eight, Robert Nisbet came to Old Lyme in 1903 to study with Frank DuMond, whose classes attracted many students. He returned in 1905 as a private student of Willard Metcalf, who was new to Old Lyme but had been his instructor in Providence the previous fall.

Both returned the next two summers, but Nisbet left abruptly in July 1907 – with Metcalf’s wife! The two married and settled in Kent, where Nisbet founded the Kent Art Association. He became a well-known painter and etcher of landscape, figural, and genre subjects, was honored with prizes, and was active in several important art organizations. He was also an avid bibliophile, fisherman, sharpshooter, gun collector, and Mason.