In spring 1850 Robert took command of the new packet ship Ocean Queen. A year later Helen and their three oldest children accompanied him on a voyage to London. Her mother Julia Powers (1787-1852) and two servants cared for the Griswolds’ 5-month old daughter Florence Ann in Lyme. Mrs. Powers wrote weekly letters conveying reassuring news of the baby and information about the household, the neighborhood, and the Griswold family.

Three weeks yesterday since you left home how much longer it appears to me, and a long time yet before I can hear from you, we are all comfortable at home ,the babe Mrs. Powers sent reassuring news about her granddaughter Florence Ann Griswold (1850-1937), Helen and Robert’s fourth child. is perfectly well as good a child as she can be, sleeps all night as quietly as any one can, laughs and jumps when she sees the bottle prepareing for her, William

Robert’s mother had visited her youngest daughter Marian Griswold Perkins (1802-1869) in the house built by Samuel Mather, Jr., in 1795 on what is now Lyme Street.
An ink drawing by John Warner Barber (1798-1885) shows the Mather house in 1836. Courtesy, The Connecticut Historical Society[tooltip label="My dear"] intended her letters from Lyme to be read by both her daughter and her son-in-law.
she says tell Helen the babe has grown fleshy Being fleshy indicated robust health while thinness suggested a failure to thrive. since she left, she was delighted to see her looking so well she was more anxious about me, she and William thought I was looking so ill, but I think I shall be better when the weather gets warmer, Miss Greenfield Mrs. Powers likely referred to Phebe M. Greenfield (1824-1873), a dressmaker in Lyme. staid here last night and says tell Mrs Griswold from her babe is looking finely and her eyes are if possible brighter than ever, 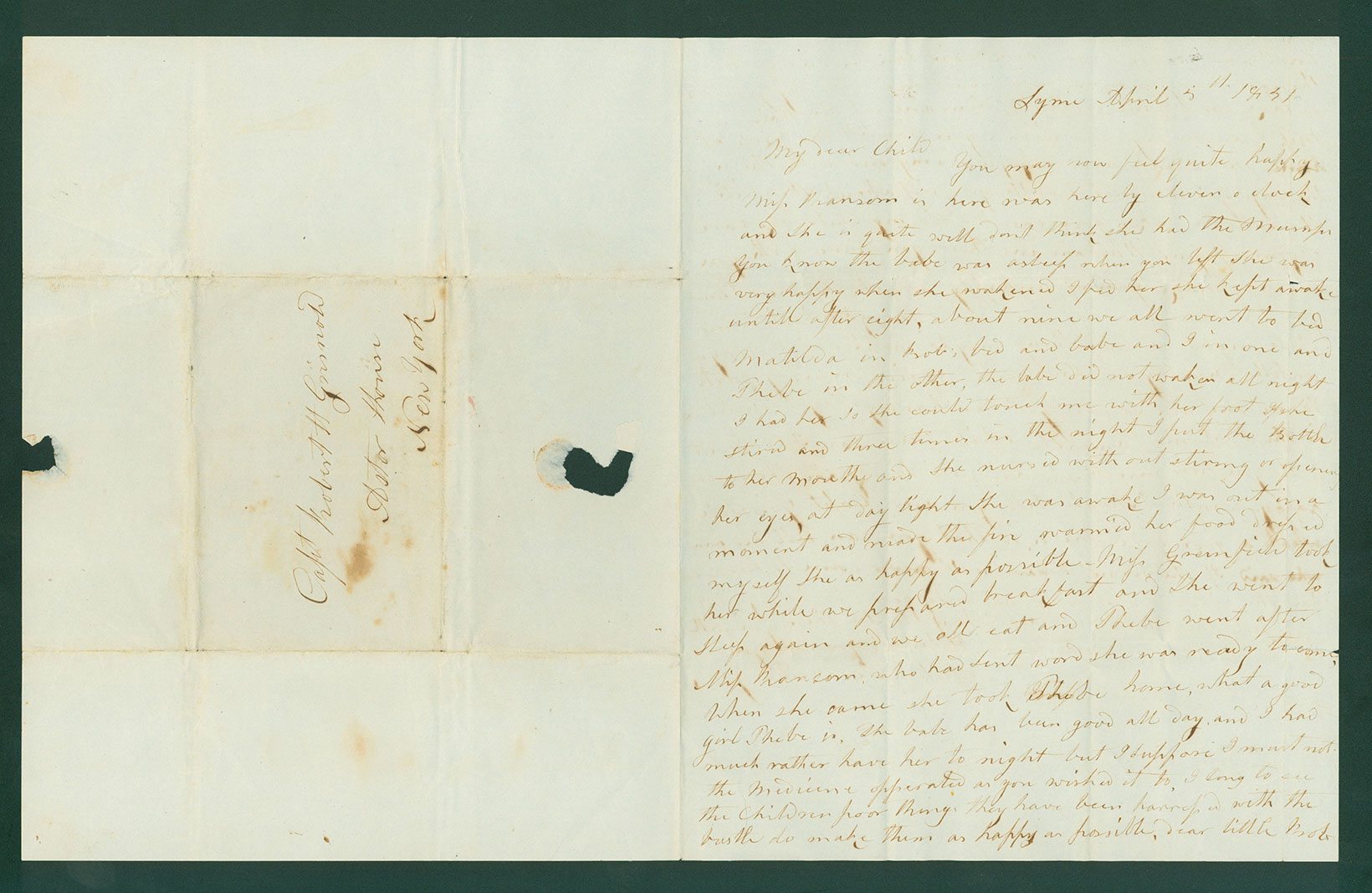 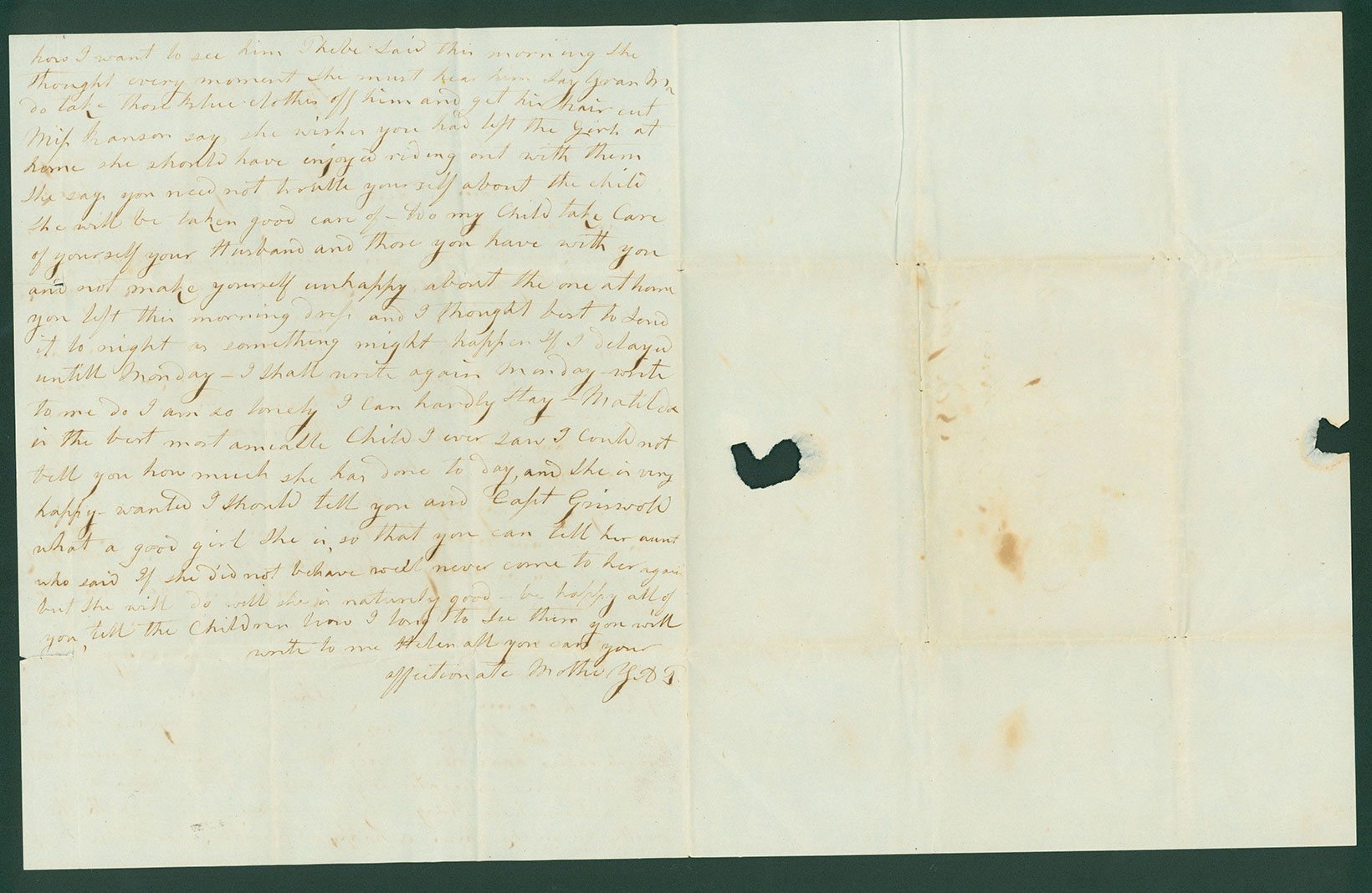 Tell Capt G Mrs. Powers abbreviates the name of her son-in-law Capt. Robert H. Griswold. that his farming is going on like clock work, Mr Barnett James Barnett, a farmer identified in the 1850 census as age 28 and born in Scotland, lived nearby and likely cared for Robert’s property and cultivated his garden. is at work at sunrise and works as long as he can see Mrs Perkins After the death of her husband Thomas Shaw Perkins (1793-1844), Robert’s sister Marian Griswold Perkins (1802-1869) raised their eight surviving children. has as much as she can bear, your Mother says she has Roger Mrs. Powers reports that Robert’s nephews and niece Roger Griswold Perkins (1829-1862), Fredrick William Perkins (1831-1899), Maurice B. Perkins (1836-1901), Joseph Griswold Perkins (1838-1913), and Lucretia Leonard Perkins (1832-1866), all stayed in Lyme with their widowed mother Marian Griswold Perkins (1802-1869). come home sick and Fred Morris and Joe and Lucretia at home as wild as they can be, Mother Griswold was glad to go home although she came up to stay, and Sarah

Robert’s brother Capt. William F. Griswold (1804-1851) married in 1831 Sarah Noyes Griswold (1815-1903). Henry Colton Shumway, Sarah Griswold, 1831. Watercolor on ivory. Courtesy of Griswold Family Archives did not ask her to stay here, and she said she did not wish to she was going such length, carpeting and curtaining it distressing your Mother as William says she shall not go to Sea this Summer your Mother sends love to your Husband yourself and the dear Children,

I dream of them every night that I sleep do be careful of them Helen, and yourself, you must try to keep healthy and strong to take care of your dear children, they have not commenced at the barn Before he left for London, Robert arranged for the building of a new barn during his absence. yet but I heard they were to commence next week,

“Saturday evening we have now weighed babe she only weighed 14 pounds, that is but little for a three months child but she is very small frame you would be delighted to see her sitting in her carriage entertaining her self for an hour with her play things tell Bob Robert H. Griswold, Jr. (1847-1864), age four and called Bob, was Helen and Robert’s third child. the little Sister plays with his sheep and laughs loud almost as he would, she is the delight of us all, Charles C

Robert’s cousin Charles C. Griswold (1787-1869) had retired to Black Hall after a successful mercantile career in New York where he established a shipping firm, later the Black X line, with his brother John Griswold (1783-1856).
W.F. Miller, Charles Chandler Griswold, 1864. Watercolor on paper. Courtesy Griswold Family Archives does not wish you to get any Girl Robert and other ship captains not only brought back from London requested items of clothing or household furnishings but also identified promising servants, usually among the Irish immigrants who traveled steerage class on the return voyage of New York packet ships. for them, they have concluded not to have one as they do not want one all the time and will get one from New York, Every thing is beginning to look like summer, the Peach and Cherries trees appear as if the fruit

Peach and cherry trees thrived in the orchard behind Robert and Helen’s home.
Griswold family home, ca. 1900. Lyme Historical Society Archives, Florence Griswold Museum would be as abundant as last year, Tell dear Adell Helen Adele Griswold (1844-1913), age seven, was Helen and Robert’s second child. I made a flower pot for her yesterday of [[?]] and violets but I will have to make many more before the dear children see them,

Miss Ransom Miss Ransom, whose given name is not provided, helped care for baby Florence Ann Griswold (1850-1837) during her parents’ absence. Is now making a Bonnet for the babe, she is very fond of her and kind as possible

Matilda Matilda cooked for the Griswold household; her family name is not mentioned. is happy as possible doing as she pleases in the kitchen, she says almost every day we have fine times don’t we Mrs Powers she is a nice Child —–

I have nothing to interest you my child excepting about your famely, I do not interest myself about other peoples affairs of course I know little, I shall if well write two letters to you in May so that you can hear from us as late as you can, you can not read this without trouble but my head and eyes are so bad I can scarcely write at all – do my children let me hear from you as often as possible to relieve the mind of your anxious mother