On his final Atlantic crossing Robert returned from London to New York on the Ocean Queen with 600 passengers on October 6, 1854. Having spent thirty years at sea, he then retired and at age 52 and settled down with his family in Lyme. The next year Robert invested with a group of neighbors in the South Lyme Nail Factory, a local business venture in which he purchased ten shares. The company, apparently unsuccessful, sold in 1858, by which time Robert served as its president. That same year he accompanied his oldest daughter Louise (1841-1896) by steamer up the Connecticut River to Hartford where she would attend, at age 17, Miss Draper’s Academy, a private girls’ school. In this last known letter between Robert and Helen, he describes Louise’s initial homesickness and explains that he will likely stay with her for an additional day.

We get off all well and in good time last Evening and put her in charge of Miss Draper Miss Draper: Julia Draper (1798-1866) and her sisters Emily (1803-1865) and Catherine (1808-1878) established the Draper Female Seminary in 1830. Pupils came from around the country, as well as the Caribbean and South America. The school’s program of study emphasized the “higher branches,” including English literature, French and modern languages, Latin, drawing, and music. . She seems a very nice Motherly sort of a Person and I had no doubt after a few days Lou will be happy enough Lou tells me this that there was only one Boarder Miss Draper’s Academy admitted fewer boarding students than day pupils from the Hartford area. there last night, but this Morning after on returning with from Shopping we found the Grounds swarming with Girls of all sizes from I should think ten years upwards. I suppose most of her Scholers Robert refers to the students attending Miss Draper’s Academy as “scholars.” are not boarders. I have got L. a first rate Raglance Gaters, Rubbers, & Gloves Robert misspells the names of several items of ladies clothing he purchased in Hartford for Louise to wear during the school year. Raglans were loose, cape-like overcoats with wide sleeves popular for women in the late 1850s and named after a commander known for wearing them during the recently completed Crimean War. Gaiters covered the top of the foot and part of the ankle, both visible beneath the shorter hems of a young woman’s dress in the late 1850s. Rubber overshoes provided foul weather foot protection. and the Silver marked Fork & Nape Ring included Poor Lou was rather down this Morning desidedly homesick I do not see how it could be otherwise at first the changes is not a pleasant one at first but She will be all right I have no doubt in a few days 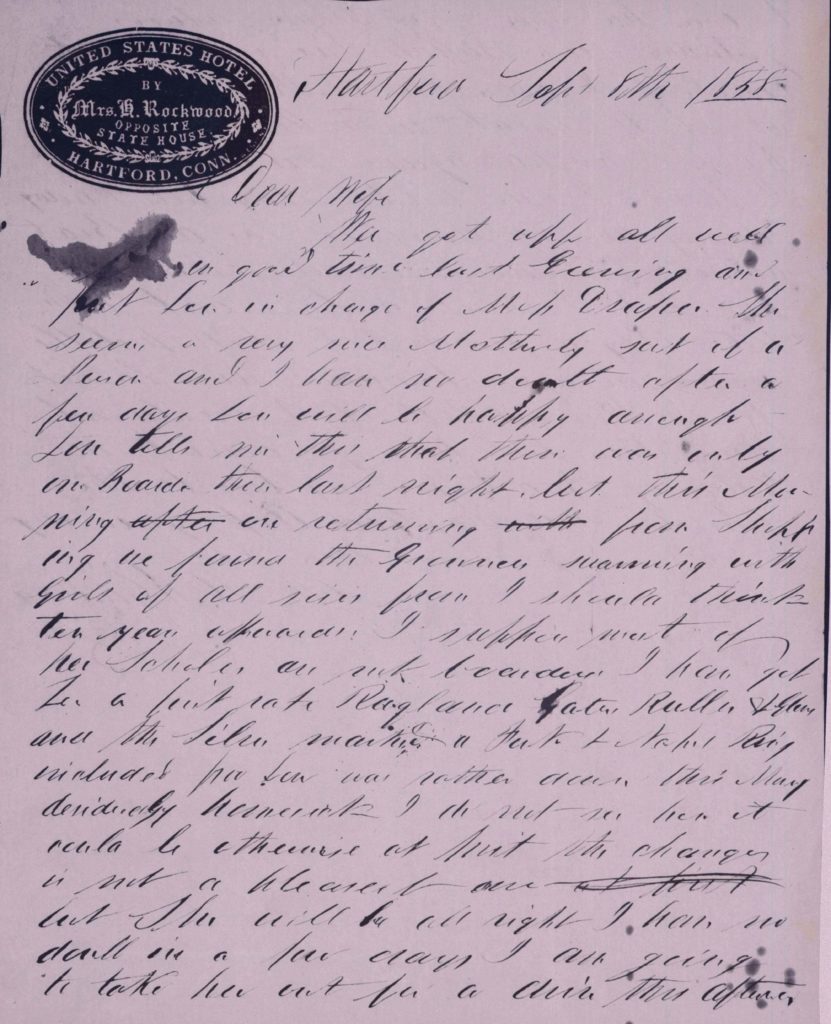 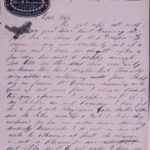 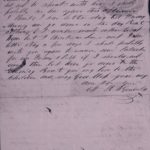 I am going to take her out for a drive this afternoon to cheer her upp. Mrs Isham During breakfast at his hotel, Robert recognized an acquaintance, Mrs. William Isham (Catharine Stedman, 1803-1879), recently returned from a visit to her daughter in Buffalo. With the migration of Connecticut natives to the state’s Western Reserve in Ohio, it was not uncommon for people to travel via rail, river, and canal to visit relatives or transact business around the Great Lakes. Mrs. Isham and her husband, a dry goods and hardware merchant, moved from Hartford to Cincinnati in 1830, where a young Helen Powers Griswold presumably knew them. Returning to Hartford, where William Isham (1803-1897) became a successful lumber merchant, the Ishams boarded at the United States Hotel for a number of years, including 1858. returned yesterday from Buffalo She is tired out traveling I shaw her at Breakfast but not to speak with her. I shall probably see her again this afternoon I think I had better stay till Friday Morning and go down in the day Boat Both the day and the evening boat between New Haven and Hartford stopped in Lyme. although I would much rather be at home but I think on Lou and I had better stay a few days
I shall probably write you again tomorrow

Robert asked Helen to send Patrick down to the ferry dock to meet him on Friday evening if he did not arrive on the day boat. The 1860 federal census does not list anyone by that name in Robert’s household, so he likely referred to Patrick Pievar (Pierce?), a 28-year-old railroad laborer born in Ireland who lived on Ferry Point.
Ellen Noyes Chadwick, View of Ferry Point, ca. 1860. Oil on canvas. Florence Griswold Museum, Gift of Mr. and Mrs. Robert H. Krieble for me Friday 1 P.M. but if I should not come then let him go down to the Evening Boat give my love to the Children and may God bless you my