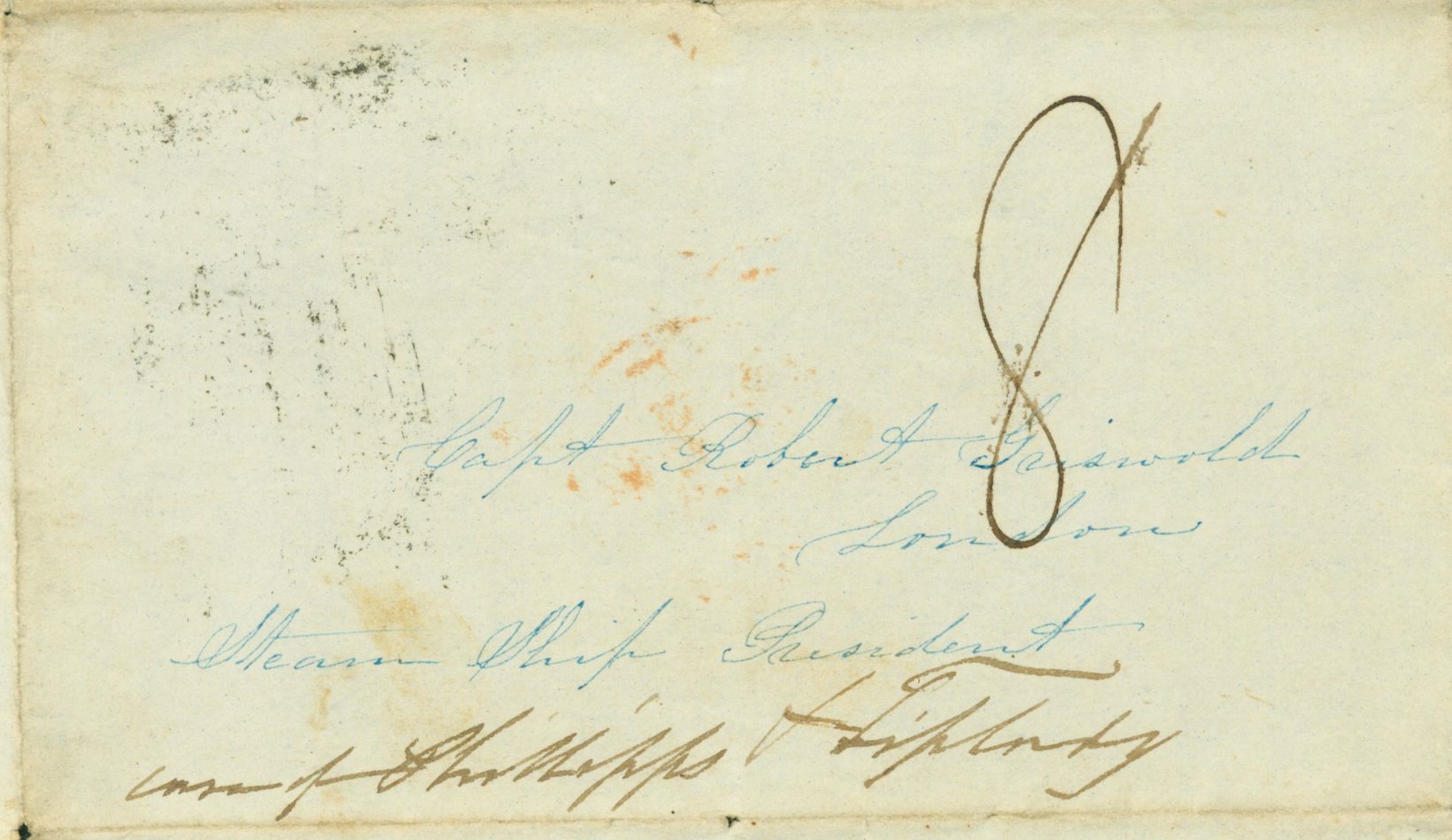 An extensive collection of letters at the Florence Griswold Museum chronicles the relationship between a successful packet ship captain who spent months at sea and his often disconsolate wife. Written from 1840 to 1858, the correspondence between Captain Robert Harper Griswold (1806–1882) and Helen Powers Griswold (1820–1899) provides fascinating glimpses of community life in Lyme while tracing the journey of a captivating young “belle” from courtship and marriage through the joys and trials of motherhood. The earliest of Helen’s collected letters, written soon after their engagement, pours out her devotion but also hints at lingering uncertainty. 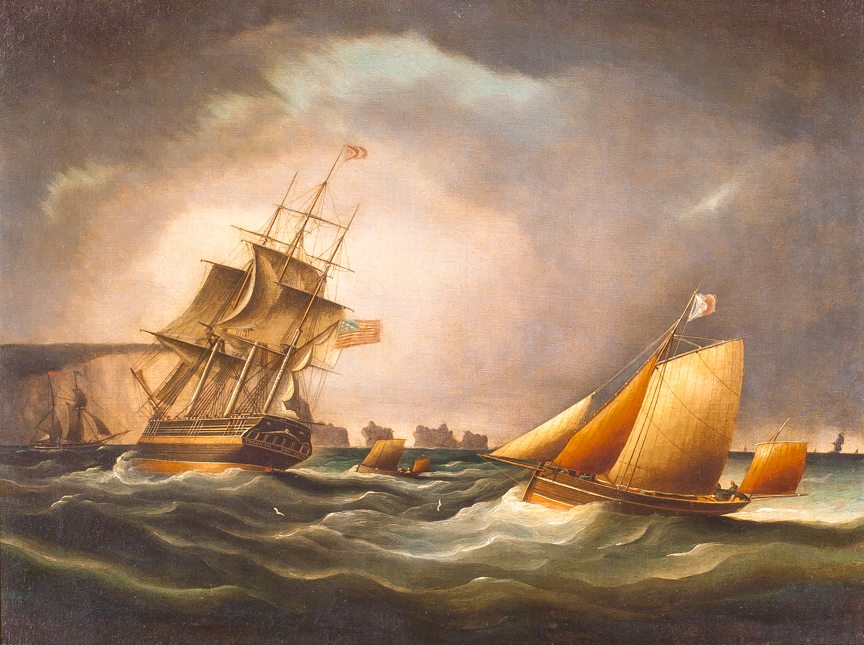 When they met in 1839, Robert had been at sea for almost a decade. As commander of the Black X line’s ship Toronto owned by his cousin John Griswold, Jr. (1783–1856), he made three voyages a year carrying passengers, freight, and mail between New York and London. His father and grandfather had both served as governors of Connecticut, and his prominent family members clustered in stately homes in Black Hall, the section of Lyme where his Griswold ancestors had first settled in the 1660s. 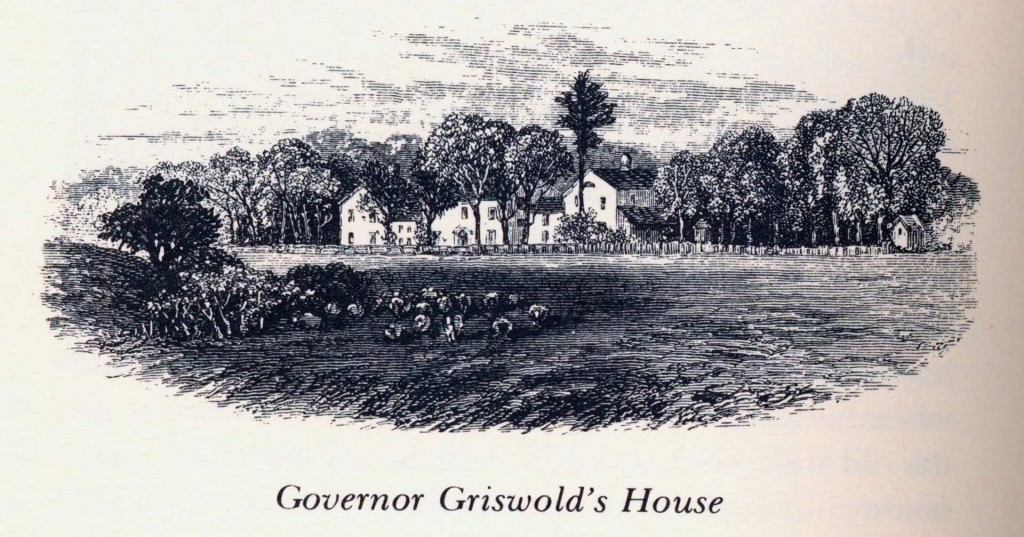 Helen’s parents married in 1809, and by 1819 they left their family homes in Guilford, Connecticut, and settled in Cincinnati, Ohio, where Helen was born. Her father Edward Powers (1787–1828), a shoemaker, died when she was eight.[1] When Helen was fifteen, her mother Julia Collins Powers (1788–1852) returned to Guilford, but she seems to have followed in the footsteps of an older cousin who attended “finishing school” in New York. Helen stayed in 1835 with the family of George Griffin (1778–1860), a successful attorney in New York who lived on fashionable St. John’s Park. While there she likely studied piano and voice, training begun at a conservatory in Cincinnati, and three years later she began teaching music at a school in Lyme conducted by Mr. Griffin’s niece Phoebe Griffin Noyes (1797–1875).[2] 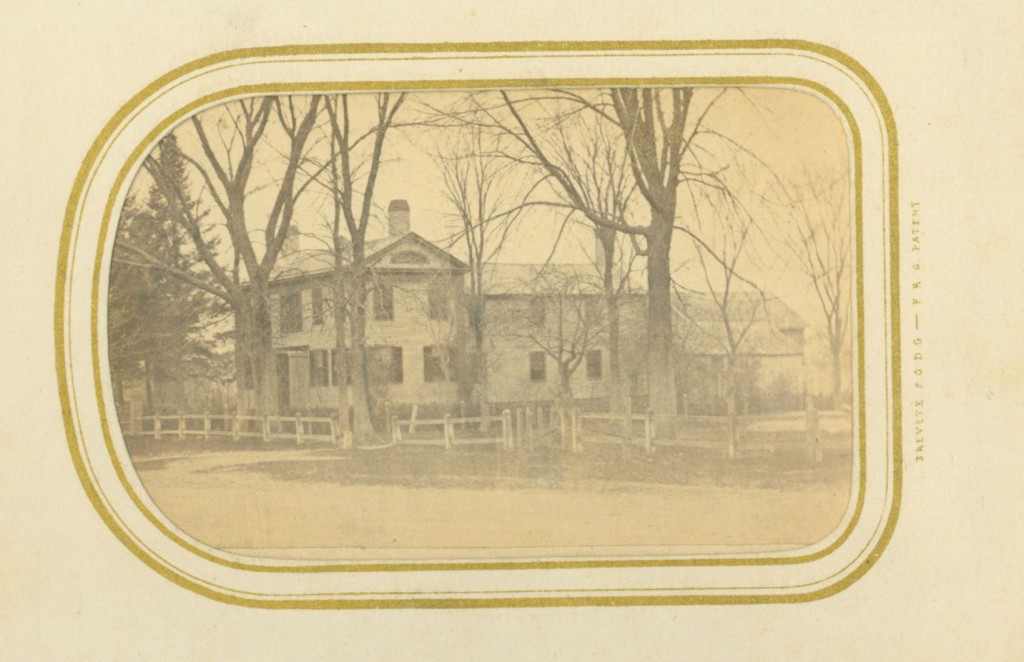 “Miss Powers, a very beautiful girl who teaches Music here this winter was the belle of the evening,” wrote Mrs. Noyes’ sister after a dancing party in Lyme in 1839.[3] Vivacious, charming, and talented, Helen drew the attention of Mrs. Noyes’ nephew George Welles (1807-1888), who referred to her as “the Beauty” and courted her until she met and fell in love with Captain Griswold.[4] Shortly before the Toronto’s regularly scheduled summer voyage in 1840, Robert and Helen announced their engagement. 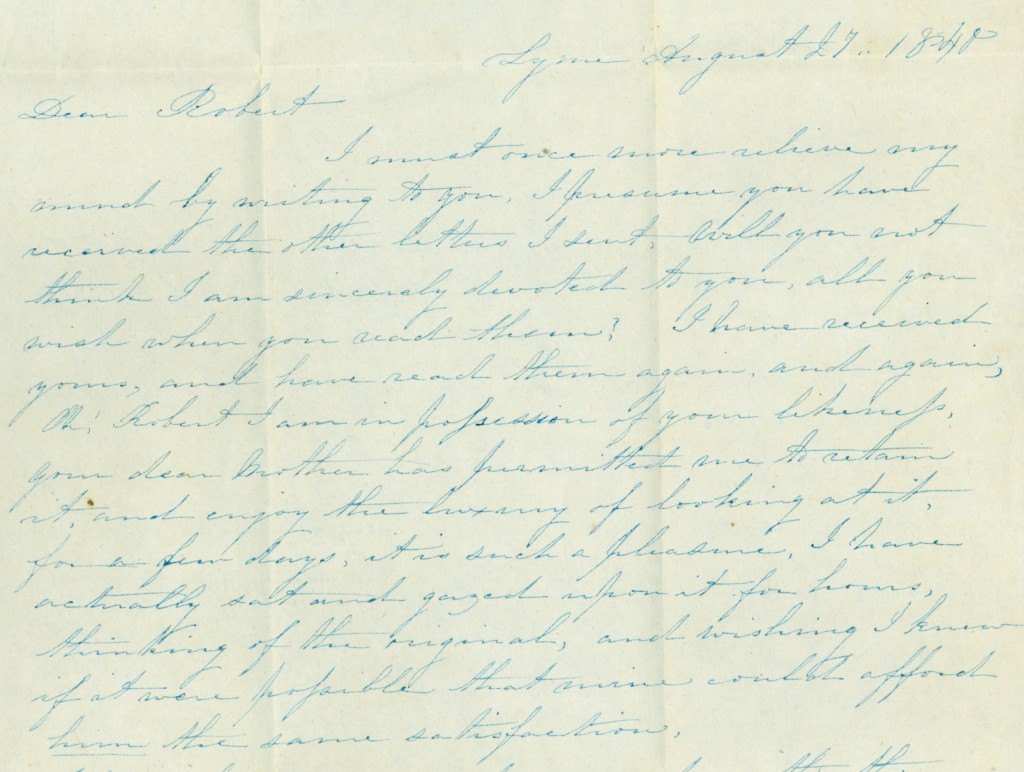 Helen’s initial correspondence after Robert left for London has not been found, but the letter she wrote on August 27, 1840, brims with affection. She mentions reading and rereading his letters, visiting his dear mother, and growing attached to his family members in Black Hall. She describes gazing for hours at his portrait, loaned for a few days by his brother, and hoping that her own likeness affords him the same pleasure. But she also writes that she has attended a number of parties and become “very dissipated of late.” She further signals her continuing popularity by detailing the furor that followed her prior suitor’s arrival in Lyme. 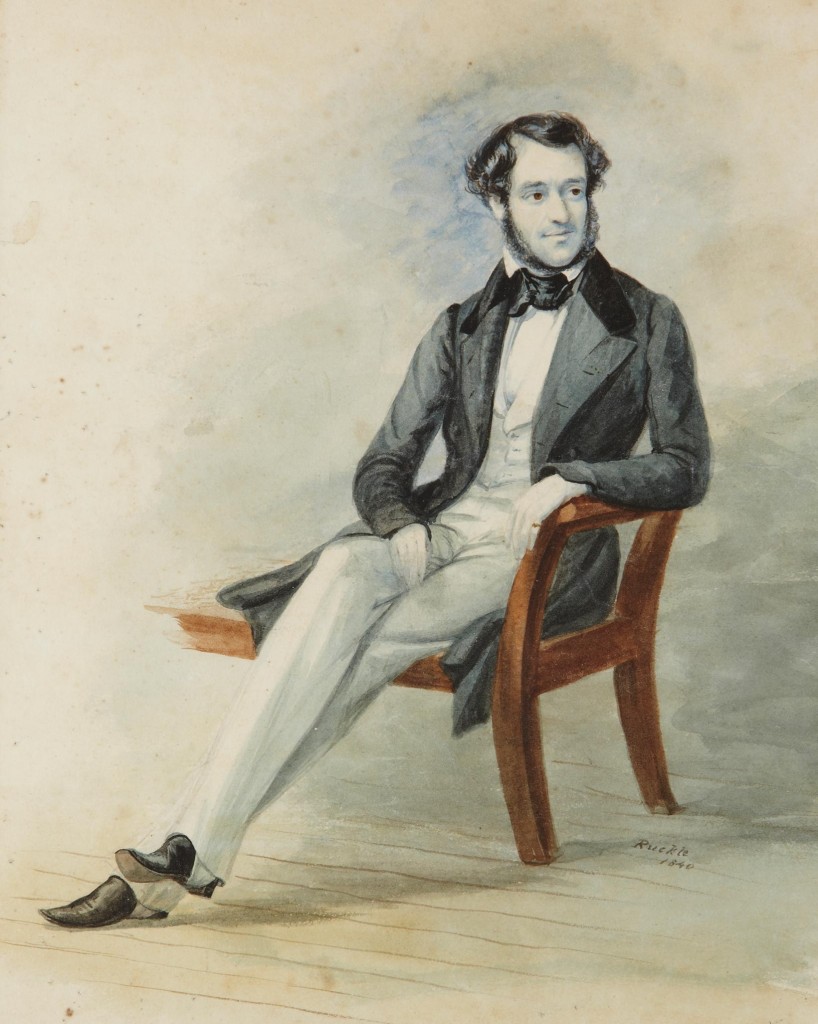 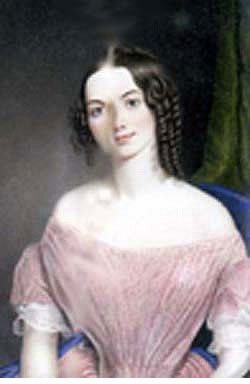 The report of their engagement “created quite an alteration” among gentlemen previously devoted to her, Helen notes, and George Welles’ week-long visit created a “sensation.” He had enlisted his Lyme friends to help “prevent and destroy” her attachment to Capt. Griswold, but that was “impossible,” she assures Robert. Yet even as she insists she gave not “the least encouragement” to her admirer, she also describes riding to Giants Neck some ten miles away to see him on the day of his departure. Underlining her words for emphasis, she claims that he “appeared so very much distressed, and in such unutterable agony, at the possibility of never again seeing me as Miss Powers, that I really pitied him, should I not?” Helen dismisses those events as “ridiculous,” but her detailed account would remind Robert that George Welles still sought her affection.

The letter’s final paragraph suggests obliquely that Robert may also have affairs to conclude. “If you have any thing to attend to or preparations to make, you must be the active one,” she urges. Hinting at uncertainty about his intentions, she notes that her mother is “always anticipating something” and would make no arrangements for their union until Robert reappears. Emphasizing her belief in candor, Helen reaffirms her devotion and stresses her eagerness to see Robert again. She closes with fervent hopes for his health and safe passage. 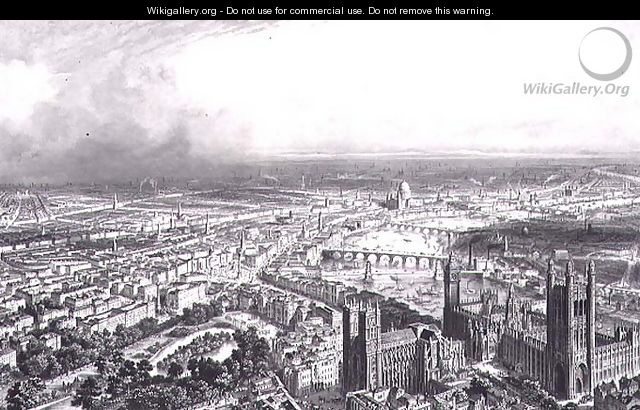 Soon after his return from London, Helen and Robert married in Guilford in November 1840, and two months later she accompanied him on his winter voyage. In a letter to her close friend in New York Caroline Griffin (1820–1861),[5] she describes the moonlit first night of their crossing, her excitement at being married, her happiness with her new husband, and her delight in the sights and pleasures of London. She also confides her determination to drive away anxiety and become “a discreet and dutiful wife.”

For more, check out the first installment of the collection of letters sent to Robert by his wife Helen, which has just been added to the Florence Griswold Museum’s website. On “Dear Dear Husband: The Letters to Robert Griswold at Sea,” you can read the correspondence, which has been transcribed and annotated with information about the people, places, and events mentioned.