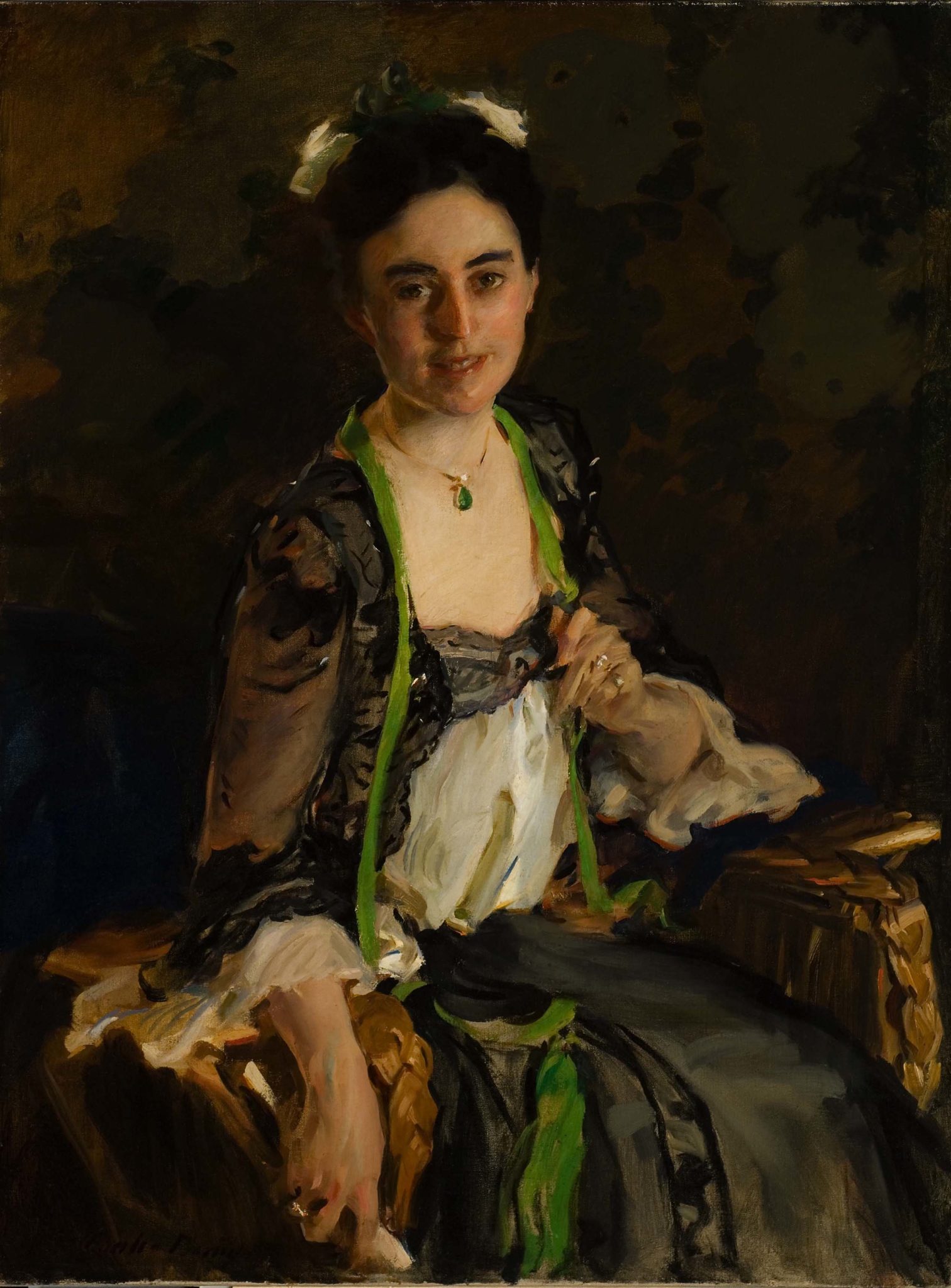 Cecilia Beaux’s luminous portrait of Ethel Saltus Ludington (1871-1922) anchors the Florence Griswold Museum’s summer 2016 exhibition The Artist’s Garden: American Impressionism and the Garden Movement, 1887–1920. Painted in 1903 in the artists’ enclave of Gloucester, Massachusetts, where Miss Beaux (1855-1942) had a studio, the portrait expresses the sitter’s vibrant personality, her dramatic flair, and her enduring love of flowers.

Raised in Brooklyn, New York, Ethel Saltus was “presented to society” in 1891. She often visited Old Lyme following her student years at fashionable Miss Porter’s boarding school in Farmington. In June 1894 she noted in her diary that she and her brother were the first guests to stay in the gracious new home beside the Congregational Church recently completed for her future father-in-law Charles H. Ludington (1825–1910). She had become engaged to Charles Ludington, Jr. (1866–1927) in January, and to celebrate her birthday that year on July 4th, the family presented her with a cake decorated with firecrackers and an autograph album inscribed with congratulatory poems.[1] 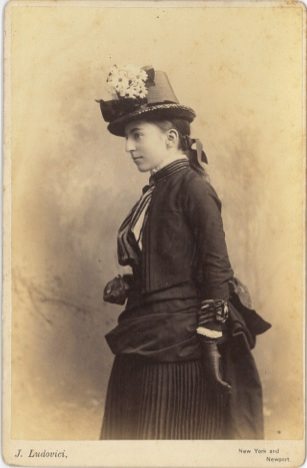 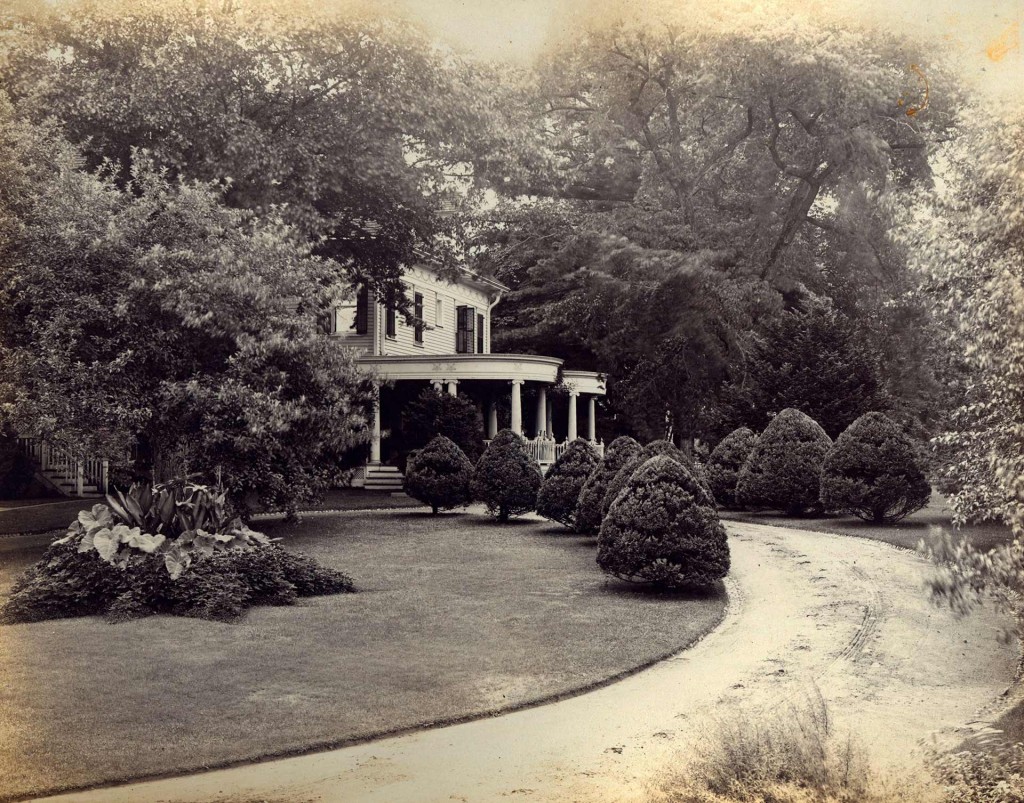 Ethel spent regular summer holidays in Old Lyme after her marriage in 1895. Her journal describes spirited tennis matches on the family’s courts, golf on a private course nearby, baseball games at Black Hall School, afternoon drives in the horse-drawn carriage, and cemetery walks to admire early gravestones. In the parlor on Sunday evenings, she played hymns while others gathered to sing around the piano. Bundling wildflowers for shipment to the city added to the whirl of summer activities.

A New York Times article praising the charitable work of the New York Flower Mission in 1879 detailed the steps required to transport fresh blooms from country towns. As fast as loose flowers arrived, the article stated, deft fingers in the mission’s rooms on Fourth Avenue combined them into bunches, then sent them out in bouquets to hospitals, settlement houses, and asylums. That year 150 towns within a radius of 100 miles of the city sent contributions, and more than 150,000 bouquets brought grateful smiles to patients’ faces. Residents in the country, “where flowers can be had for the picking,” were asked to assist in this non-denominational effort. They need only procure a wooden box, line the bottom with newspapers or fern leaves, pack the flowers in layers, cover them closely with newspaper, and convey the crate to a railroad express agent. The boxes would be emptied and returned. “The bouquets should be small, with a sweet-scented and bright-colored flower in each,” and the stems left long.[2] Individual churches soon launched their own flower missions. 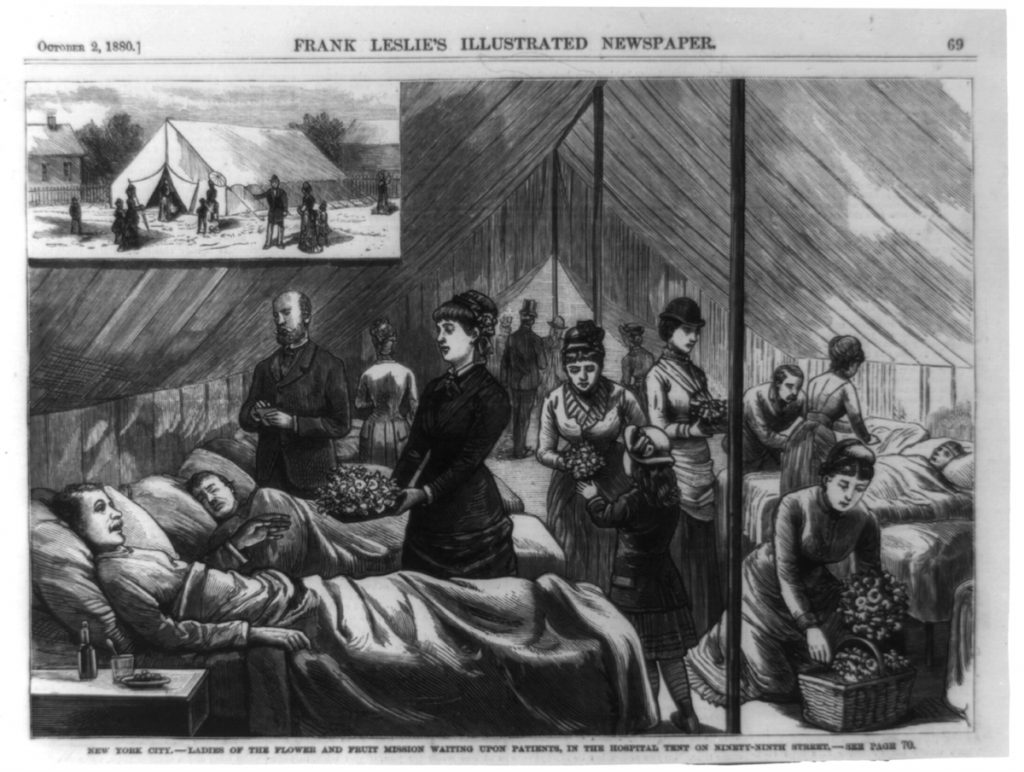 “Ladies of the Flower and Fruit Mission Waiting on Patients,” Frank Leslie’s Illustrated Newspaper (October 2, 1880). Retrieved from the Library of Congress, <https://www.loc.gov/item/2007675500/>

Katharine Ludington (1869–1953), Ethel’s sister-in-law, had from childhood gathered wildflowers from Old Lyme’s fields and roadsides and delighted in making decorative arrangements. In September 1887, after completing her studies at Miss Porter’s School where she was known as art teacher Robert Brandegee’s (1849–1922) most talented pupil, she described two “special” bouquets in a letter to a cousin. “One, in a robin’s egg blue vase, was of ferns which had turned light brown, cream color and white, yellow leaves and a few pale red and brownish pink maple leaves. The other was of dark rich red leaves of all kinds, sumach, Pepperidge and maple and the effect of the two roses in opposite corners was gorgeous.”[3] Katharine’s letters began mentioning her busy flower mission work in 1895, and the next year Ethel joined in that pleasurable summer task.

“Went to drive on the Hamburgh road and gathered quantities of golden rod and asters,” Ethel noted in her diary in September 1896. “Picked flowers by the roadside as well as at the Matson’s” with “most of the afternoon given to tying up flowers,” she wrote the following autumn. On a second excursion two weeks later, after “a fine walk in the woods picking golden rod, everlasting & bay leaves,” she “spent several hours after lunch tying up bunches of flowers for the Sea & Land Mission.”

The Church of Sea and Land, founded to minister to needy mariners and their families on New York’s Lower East Side and dedicated in 1819, had recently been saved from financial ruin through the efforts of Rev. Charles H. Parkhurst, the influential pastor at the Madison Square Presbyterian Church where the Ludington family were active members throughout the winter months. “The Church of the Sea and Land has recently become part of the mission work of Rev. Parkhurst’s congregation,” a newsletter reported in 1894.[4]

Ethel Ludington’s love of flowers would later find expression in the luxuriant formal gardens she designed at her Clovelly estate near Philadelphia and in her contributions to the Philadelphia Garden Club. At age 32, when she spent most of July in Gloucester sitting for Miss Beaux’s portrait, she selected from her extensive wardrobe a diaphanous black jacket of old lace and gauzy square-neck white blouse. As accessories, she chose an emerald pendant, a slender vine-like green scarf that twined into her lap, and a pair of white camellias to decorate her glossy black hair. “Ethel showed us last evening a Kodak of her portrait in the charcoal stage just to show the pose & outlines. It was very spirited, & promises well,” a family member noted in early August.[5] 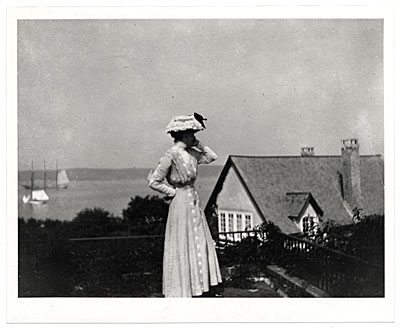 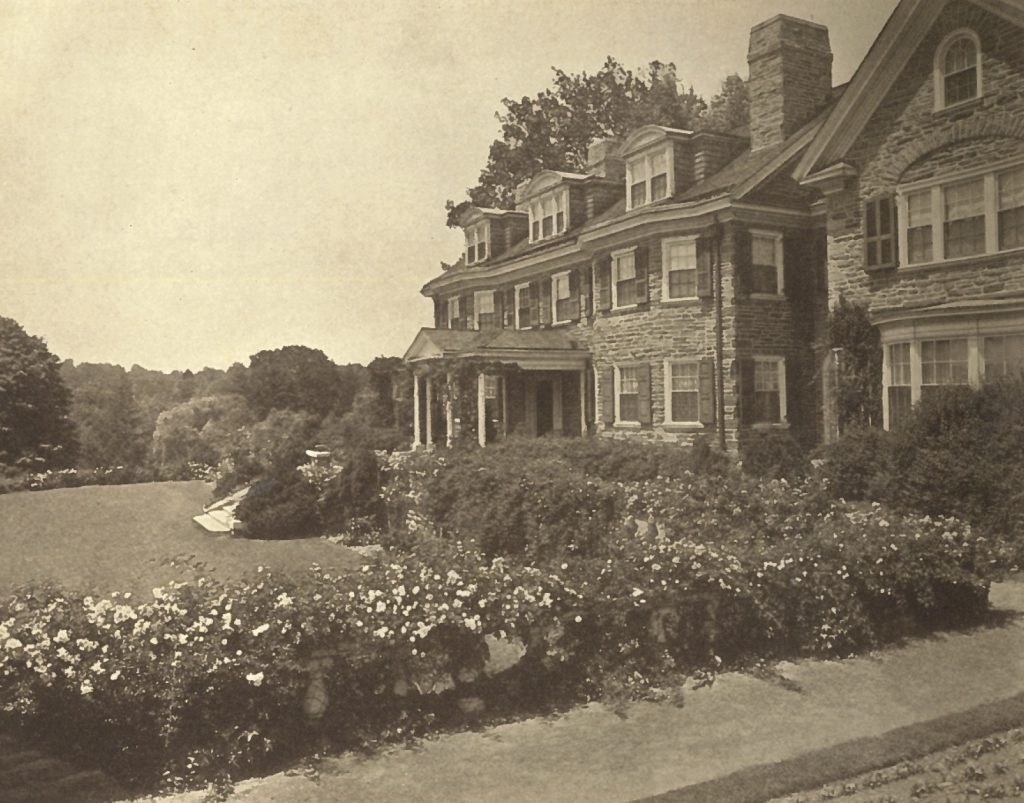