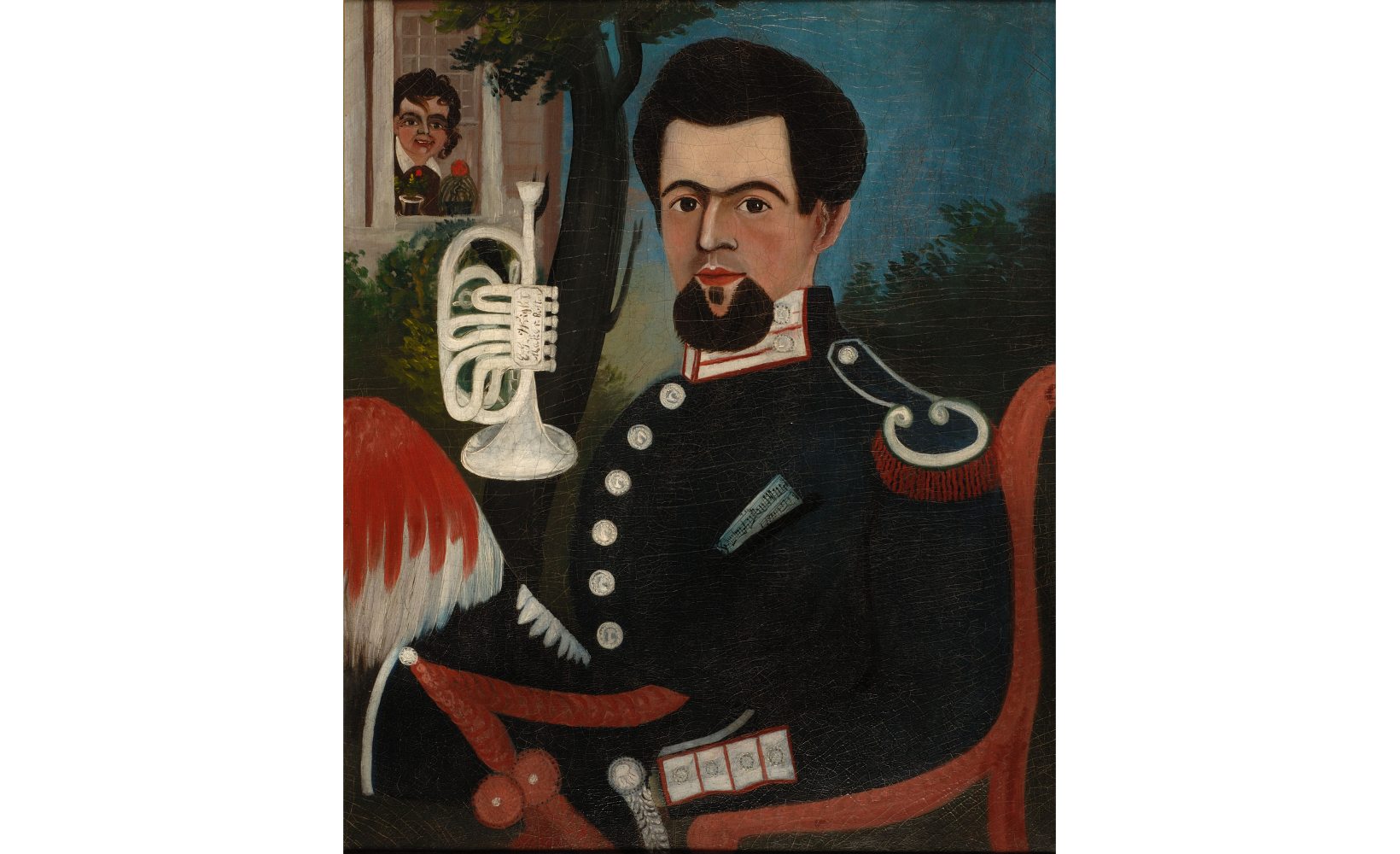 The riveting portrait of a Massachusetts band member in braided uniform displayed in the “The Art of the Everyman,” the Florence Griswold Museum’s summer 2014 exhibition, reminds us of the important role musical groups played in 19th-century New England towns. Some forty years after that unknown musician posed proudly with his cornet, local benefactors in Old Lyme supported their own community band.

Concern with civic improvement led to the formation in 1885 of the Old Lyme Music and Literary Association. Its purpose was to raise funds for a centrally located building with rehearsal space for the town band, shelves for the 3,000 books in the lending library, and tables for a recently launched reading club. Local attorney James Griswold (1828-1892), estimating costs at $600, circulated a subscription form.

“Our idea,” he wrote to summer resident Charles H. Ludington (1825-1910), ”is to have a building say 24 ft by 40 with 12 feet posts and a somewhat sharp roof open inside, supported by trusses, which may be made rather ornamental without much expense.” The building, Griswold explained, would serve multiple uses: “Book cases for the library with doors capable of being locked, placed against the sides where most convenient and one or two large tables to be provided, on which the magazines and papers etc can be put for the Reading Club when in session—These can be put in the cases and locked up at other times, leaving the tables for the use of the Band when required.“ Mr. Ludington sent a check for $300.[1] 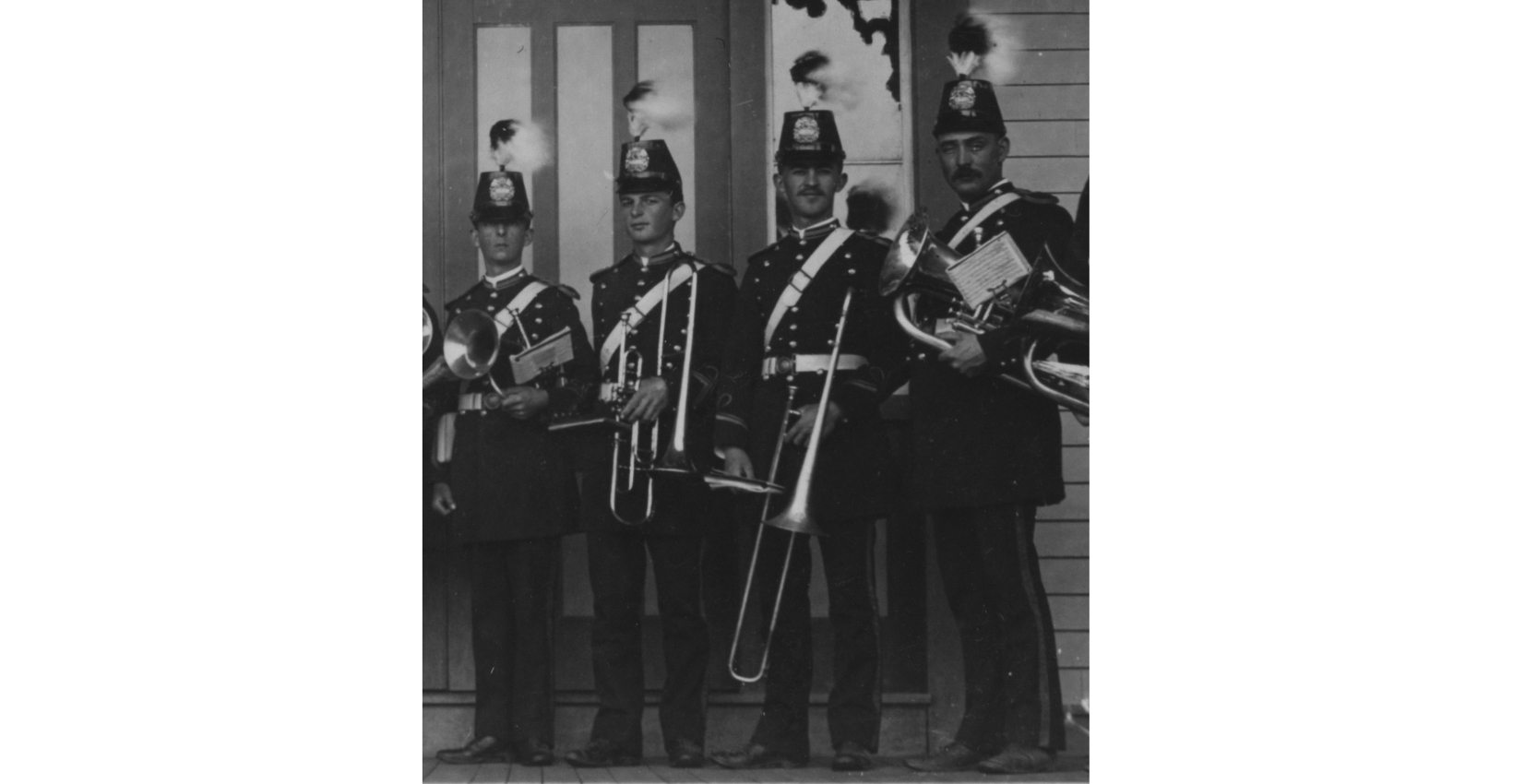 The band, already rehearsing twice a week, would offer not only musical entertainment for the community but educational enrichment for its members. Mr. Griswold noted that the young men of the town were very much interested. “It is seldom that any of them fail to attend the meetings,” he wrote, “and it is surprising to see the effect that these gatherings have in enlarging and heightening their ideas, and ridding them of that rustic sullenness and shyness so common in country bred boys.”[2]

In March 1886 Charles R. Noyes (1828-1912) who owned a large farm on Ferry Road deeded a small plot of land beside the lower Lieutenant River bridge to trustees of the Music and Literary Association. On the well-traveled road connecting the village with the train depot and ferry landing, a multi-purpose community building that served both the band and the library was completed later that year.[3]

Ongoing support for Old Lyme’s musicians came not only from individual donors but also from the sale of a cookbook published in 1886 by G. A. Smith’s local print shop. According to the Sound Breeze newspaper: “The Neck Road Society, a group of ladies instigated by Mrs. R. S. Griswold, compiled and had printed to sell for worthy town projects, one of which was the Town Band, the long famous Lyme Receipt Book.” Miss Florence Griswold (1850-1937), who would later establish the Lyme Art Colony but at age 36 taught French and other subjects at her family’s home school, contributed recipes for a sweet grape pickle, a gelatin dessert with figs, and a pound cake laced with brandy. 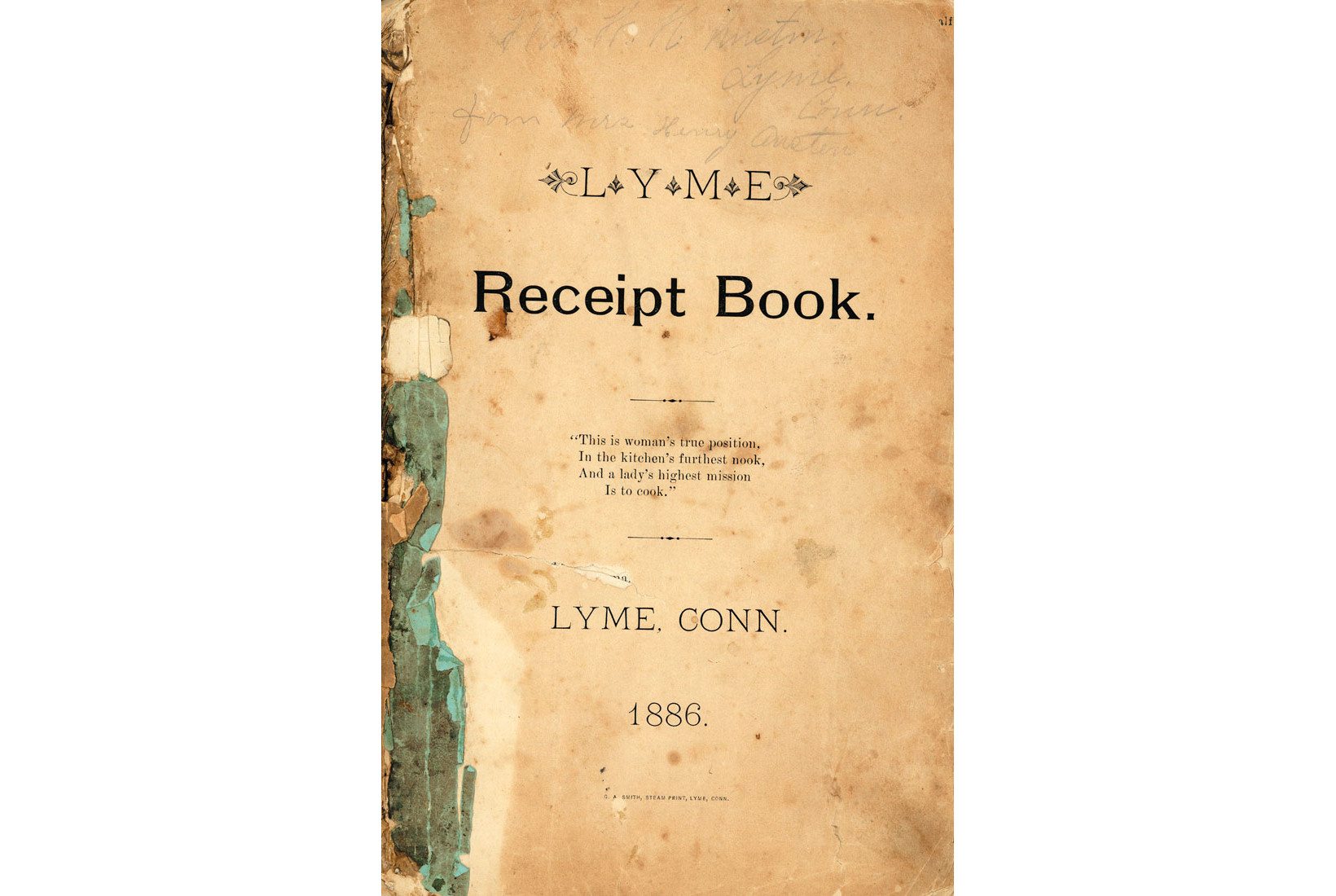 A number of the town’s leading citizens rehearsed faithfully in the new Band Room. The first instructor, “a Mr. Chapman from Niantic,” agreed to teach only if band members had already learned their instruments and their notes, John Ely Noyes (1862-1948), who played the cornet, recalled many years later. The next teacher, also a cornet player, was John Morley, who owned a bicycle and carriage repair shop on the main street and served as the town’s undertaker. Ernest Chadwick (1868-1916), a young attorney, and Herbert Caulkins (1856-1920), a former postmaster and later manager of the Old Lyme Inn, also played the cornet. The steam ferryboat’s engineer Frank Saunders was a clarinetist, while the town doctor Edward Griffin (1840-1887) played the bass drum.[4]

The cornet that served Charles Ford Ely (1858-1909), father of former town historian Susan Hollingsworth Ely (1905-1986), over more than two decades in the town band has been carefully preserved. Purchased for $55.00 at a prominent New York City music store, the finely manufactured cornet imported from F. Besson & Co. in London came with a guaranty of quality and an eight-year warrantee against “any defect in material or workmanship.”

Rehearsals continued in the Band Room after the town’s book collection was transferred in 1898 to the handsome new Phoebe Griffin Noyes Library on Lyme Street. Band concerts at the Town Hall, the Congregational Church, and the Old Lyme Inn on Ferry Road, as well as in surrounding towns, continued to draw eager audiences after 1900. Local musicians also took advantage of changing technology, as the Sound Breeze noted: “L. A. Champion had his phonograph at the band rehearsal last week and reproduced some of the band’s pieces, so the boys had an opportunity to listen to their own music.”[5]

But along with electrification and the growing availability of automobiles, new forms of entertainment arrived with the new century, and the distinctive red-roofed building beside the Lieutenant River served purposes that its founding trustees never envisioned. In 1901 the first moving-picture ever shown in Old Lyme was screened in the Band Room. Three years later the Art Students League rented the building for its summer indoor art classes. At Saturday afternoon criticism sessions, the Sound Breeze reported, “the week’s output is lined up on the walls of the old band room where their creators come prepared for the worst.”[6]

By then the band members were aging, and as Florence Griswold welcomed the country’s most prominent landscape painters to her stately home on Lyme Street, the town’s cultural focus shifted to art. A meeting of the Music and Literary Association’s sixty stockholders called in 1909 to discuss the Band Room’s future was poorly attended. Boat builder and clarinetist Henry Noyes (1826-1917), then 83 and said to be the only trustee “who has taken any active part in the matter,” told The New Era that a majority of those present favored “the disposal of the building and the giving of the proceeds for public improvements, either for street lighting, the improvement of the Duck River cemetery, or the library.”

The Ladies Aid Society of the Old Lyme Grange had already begun negotiations to purchase the Band Room as a permanent home for the popular fraternal organization but instead in 1910 signed a long-term lease on the clubhouse built by the Old Lyme Gun Club four years earlier.[7]Not until 1924 did the Music and Literary Association’s only surviving trustee, the former band teacher John Morley, obtain a judgment from the Superior Court at Norwich authorizing sale of the building “for the best obtainable price.” A month later the property sold for $2,000,[8] with proceeds donated to the town library for a planned new addition.

The Library’s McCurdy-Salisbury wing, which benefited also from funds raised at weekly teas held on the lawn of the newly opened Lyme Art Association, was dedicated in 1925. By then the Jazz Age had arrived and Old Lyme had become a center for American Impressionism, but its uniformed brass band remains an important part of the town’s cultural history. The Band Room built more than a century ago is today a private residence.