A century ago, future Lyme artist Thomas Nason spent Christmas 1918 in France following the Armistice that had ended World War I just six weeks earlier. Nason had deployed to France in October 1917 as a Battalion Sergeant Major with the Yankee Division (Headquarters, 26thDivision), the first American unit to reach the front. Following a period of training with the French, the soldiers from around New England entered the fray, fighting in the most brutal exchanges of the war over the course of 1918. Reflecting a soldier’s sense of humor, the holiday menu references their itinerary, from “Foret d’Apremont Soup” named after the bloody conflicts with the Germans in the Bois Brulé, to Belleau to St. Mihiel. The menu concludes with “Armistice Candy” and “Montigny Nuts,” named for the town of Montigny-le-Roi where the 26th Division moved its headquarters just after the cessation of hostilities for a much necessary respite and re-supply. The soldiers arriving in Montigny had experienced only ten days off during their many months in France, so feasts and entertainments like the one documented on this holiday menu and program were welcome as the soldiers waited to return to the United States. 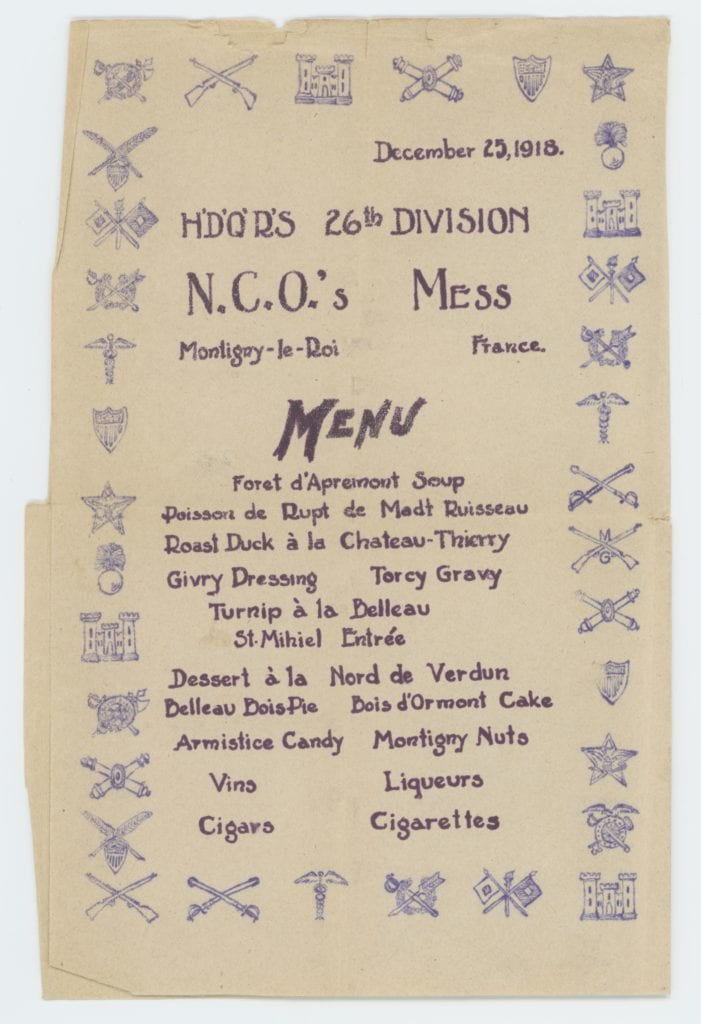 In honor of the Yankee Division’s extreme sacrifices, Woodrow Wilson reviewed the troops on Christmas 1918 during his trip to France for the Peace Conference, making him the first U.S. president to do so on foreign soil. Addressing the soldiers “from my real heart,” Wilson commended their brave actions and acknowledged their painful memories as well as imparting a message of encouragement for the future: “I feel a comradeship with you to-day which is delightful. As I look down upon these undisturbed fields and think of the terrible scenes through which you have gone, and realize how the quiet of peace, the tranquility of settled hopes, has descended upon us, while it is hard to be far from home, I can bid you a Merry Christmas, and I can, I think, confidently promise you a Happy New Year, and I can from the bottom of my heart say, God bless you.”[1] His remarks were followed by Christmas dinner with the officers of the Yankee Division, where they were served chickens, turkeys with dressing, cauliflower and mashed potatoes, and pumpkin pies on bare tables sourced by soldiers with civilian restaurant experience.

While the program for the president’s dinner with the 26th’s officers was drawn and printed in the field by the topographical section of its intelligence division, the menu for the non-commissioned officers’ dinner preserved in our archives may reflect Nason’s touch. A budding artist, Nason may have been responsible for the lettering, the insignias surrounding the menu, and the drawing of the conjoined YD logo of the Yankee Division. He would go on to become one of the most renowned printmakers of the twentieth century, whose exacting wood engravings are on view in our current exhibition Paper Trail: American Prints, Drawings, and Watercolors through January 27, 2019.

Nason’s name appears among the “Mess Members” providing holiday fare and entertainment to their comrades that Christmas—the soldiers’ second one away from family and friends. While President Wilson’s dinner with the officers was framed in more solemn terms, the N.C.O.s’ banquet was followed by songs, stories, female impersonations, and a jazz trio, in addition to toasts “to Folks back home” and “to the Honored Dead.” Their life in the trenches had been brutal, so the festivities offered soldiers a chance to commemorate the Christmas holiday with an eye toward home. Nason’s future wife Margaret Warren, also known as Peggy, was likely on his mind that day. This menu is preserved in our archives among his many letters to her from France. The two would marry upon his return in the spring of 1919. 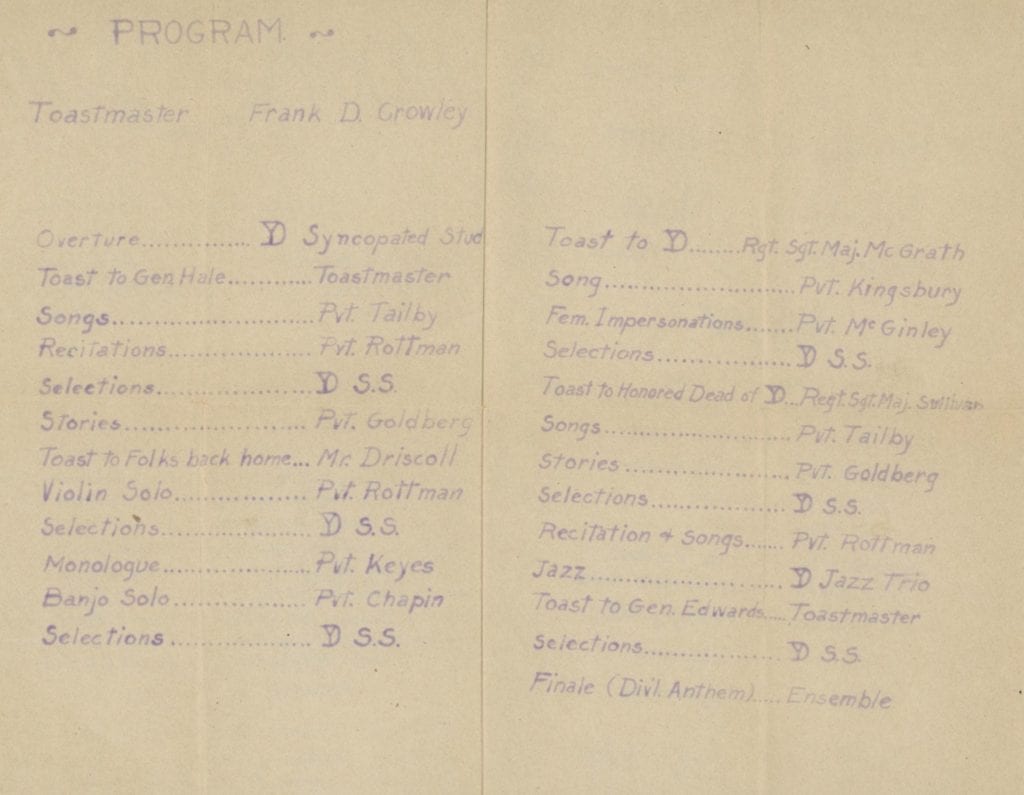