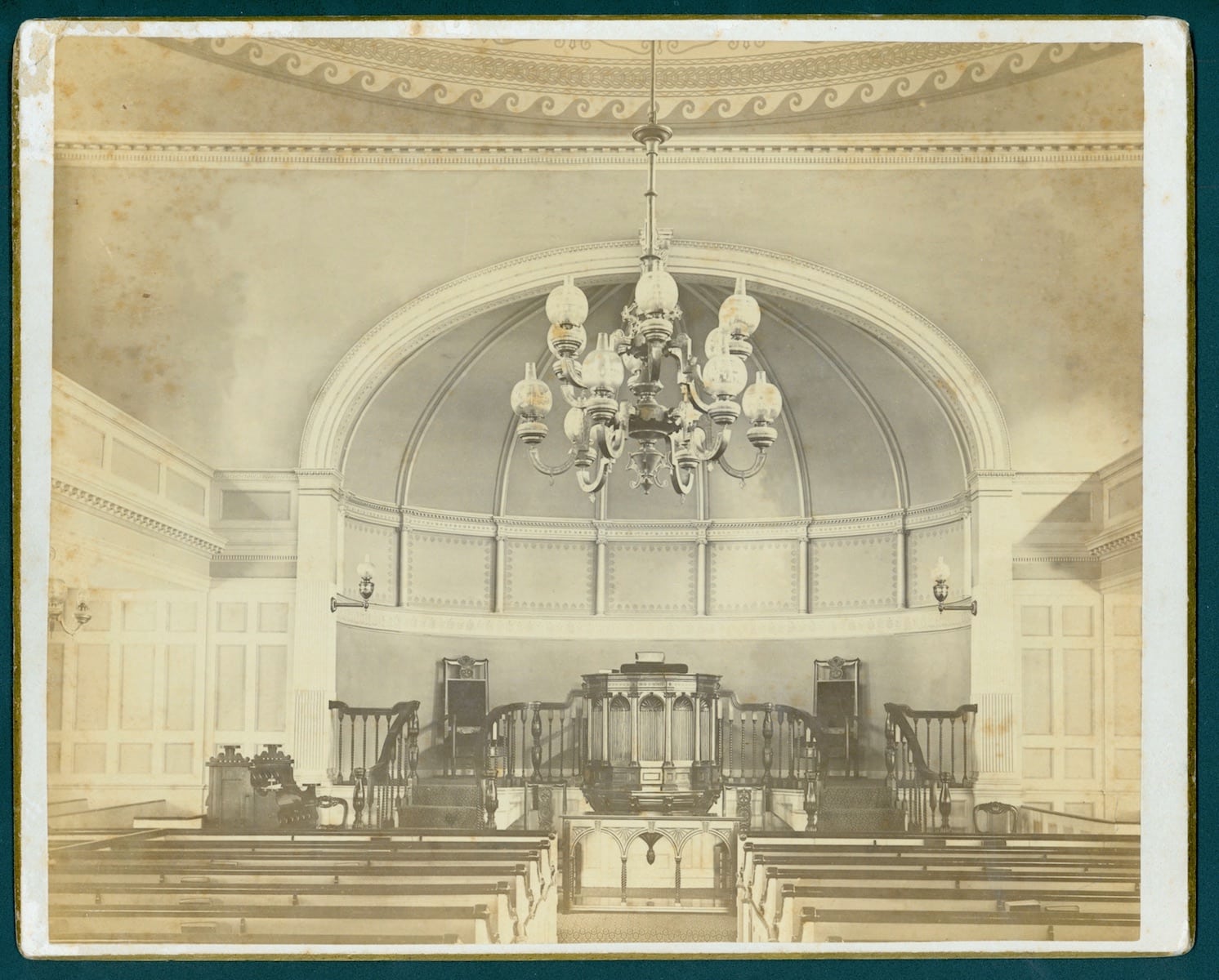 Martha Pond, age 57, could see Old Lyme’s celebrated white meetinghouse from her home on Ferry Road, where she wrote in 1895 a light-hearted ballad titled A Simple Story Now Told in Rhyme, about a Darkened Window in Lyme. Its eight-line stanzas unfold the adventures of two young lovers who wander through the church during a recent renovation “when it looked so forlorn.” Attracted by the outline of “the old pulpit window” still visible on the exterior wall, they climbed “over rubbish and plaster and dirt” and found a love letter deposited long ago in a chink in the wall. The poem, published as a separate pamphlet, sold for 25 cents “for the benefit of the church.” 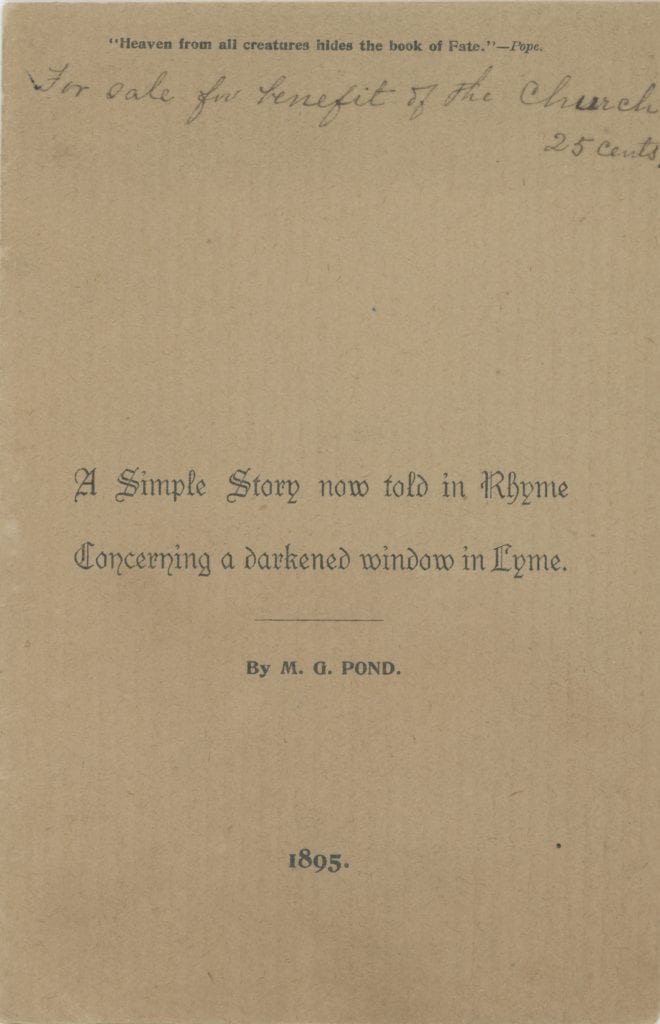 The “simple story” allowed Miss Pond to document departures from the design for the original meetinghouse in 1817 and to mock gently but eloquently a subsequent lapse in aesthetic taste. After forty years people awoke, she wrote, and recognized belatedly that the skilled architect Samuel Belcher had “made no mistake.” They regretted the destruction of the west window that “gave the preacher some light” and the installation of a high desk, “cold-looking and bare,” that replaced the mahogany pulpit. They also criticized the materials used in the 1850 alterations as “nothing but pine” and urged that “For the House of the Lord there is nothing too fine.”

The window which gave to the parson some light,
Walled in by new plaster was hidden from sight;
A desk for the preacher, cold looking and bare
Took the place of mahogany pulpit and stair.

When the “new pastor” Rev. Benjamin Bacon agreed that the church was “quite ugly,” its members moved forward with plans for restoration. “’Tis time it be changed,” they said. “We will see if this matter can be re-arranged.”

Enthusiastic praise greeted the restoration of the meetinghouse by New York architect Henry Rutgers Marshall in 1887. The New York Tribune commended “the exceeding beauty of the interior,” and noted that “the people of old Lyme have in their possession one of the choicest gems of old New-England, a unique and beautiful relic of the past, only with added graces.” 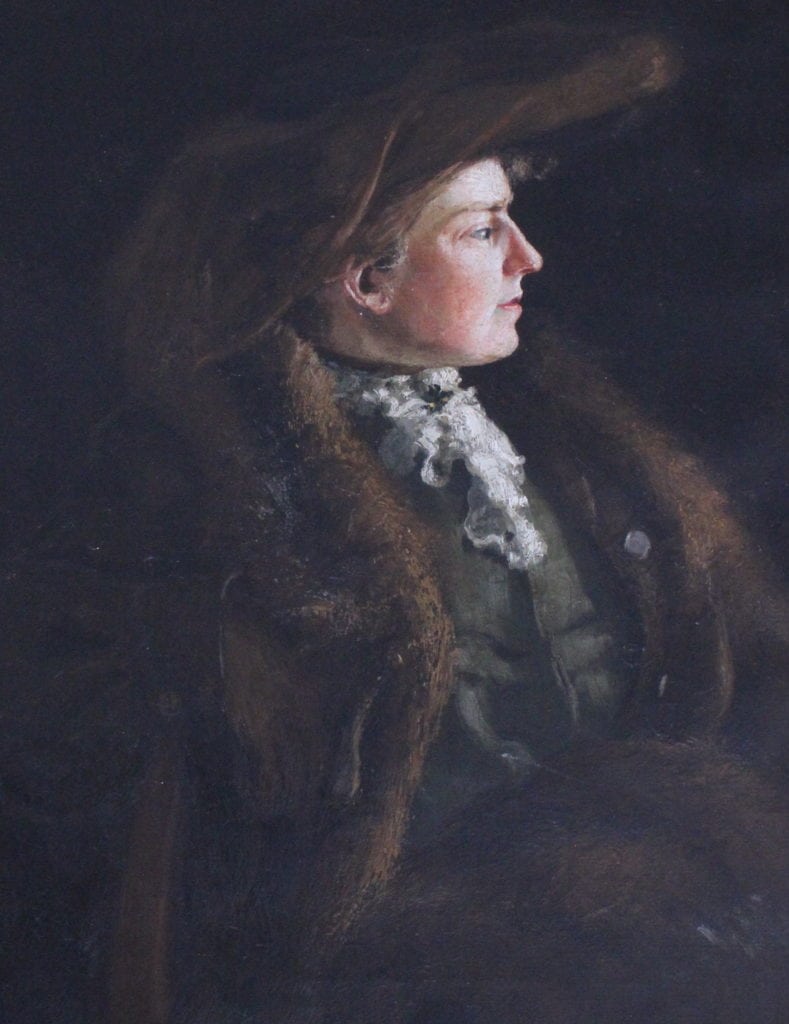 Martha Gillette Pond had moved from Milford to Old Lyme to live with her widowed aunt Mary Pond Sill after the death of her uncle Horace Lynde Sill in 1874. Their only child Richard Griswold Sill had drowned in the Connecticut River at age ten, and Miss Pond inherited the gracious home built by her uncle when he retired from the prosperous NL & GG shipping house established by Griswold cousins in New York. With Old Lyme’s flourishing art colony attracting growing numbers of landscape artists after 1900, Miss Pond provided an outbuilding beside her home for use as a studio by Abraham L. Laiblin, a talented New York painter raised in Ohio who taught art classes at the nearby Boxwood School for Girls. A. L. Laiblin exhibited landscape paintings in Old Lyme’s annual summer exhibition in 1903 and 1907. 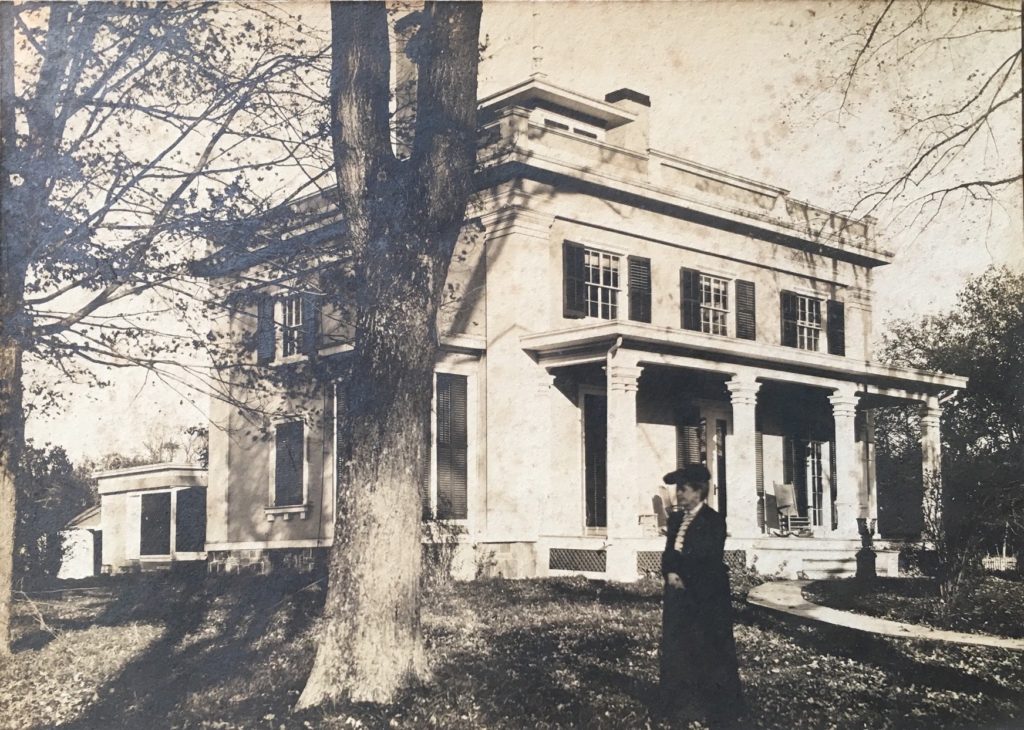 Martha Pond in front of her home (the former Horace Sill House) on Ferry Road, down the street from the church, ca. 1904. Courtesy of Carolyn Wakeman 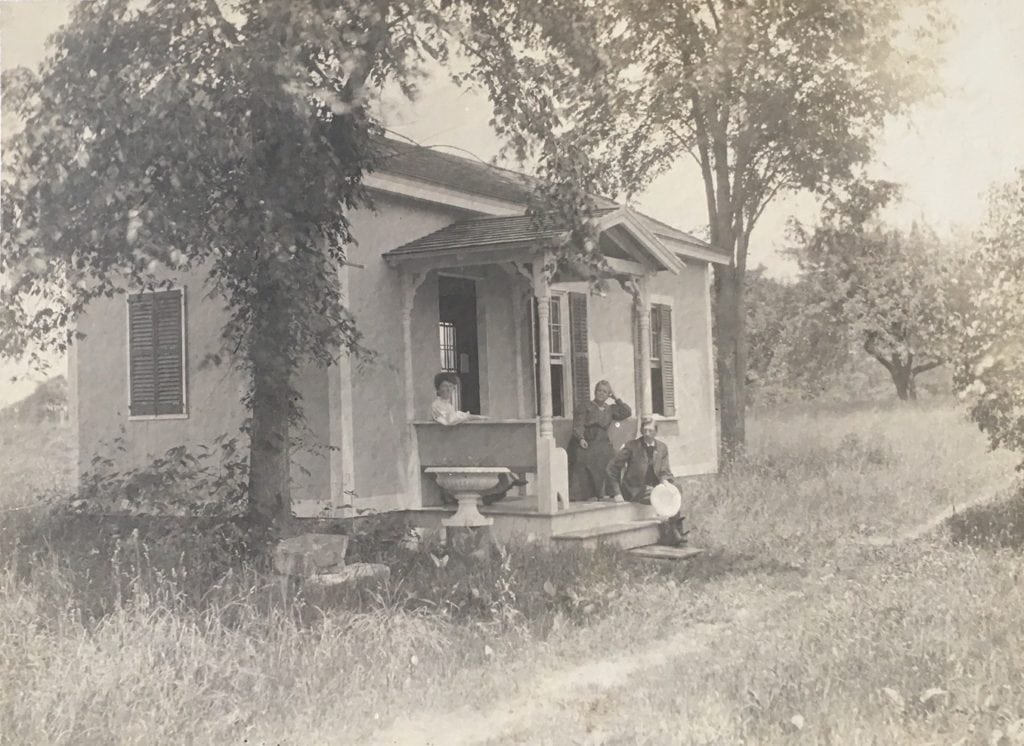 Martha Pond described Old Lyme in her poem as “A somewhat old fashioned town, if you please,/ With its one broad street and its fine shade trees.” She referred to the meetinghouse as the “architectural boast” of the town and noted that some said it “savors the style of ‘Great Inigo Jones,’” while “others assert that the man among men/ Who modeled this building was Christopher Wren.” Her use of the mock heroic style cast humorous light on lofty claims about the meetinghouse’s supposed architectural heritage, but she clearly applauded the decision to “restore the old church to its primitive plan.” The New Haven Register called the restoration an “unqualified success” that demonstrated “great taste, together with high educational accomplishments and a warm love for the venerable and beautiful.” 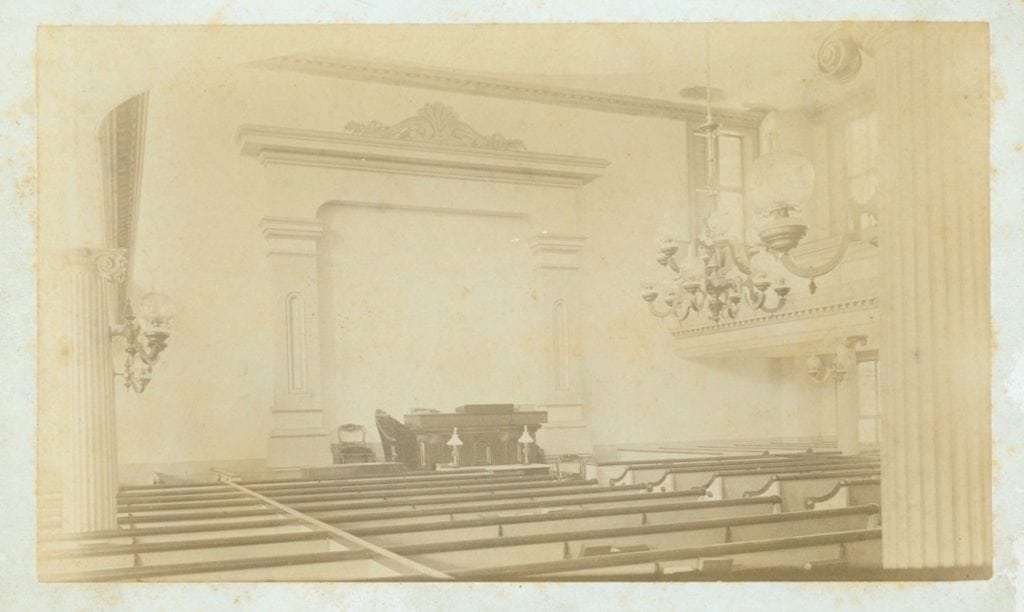 For more information about Old Lyme’s historic Congregational meetinghouse, see History Blog articles about the town’s white churches, the devastating church fire in 1907, and the controversy about plans for rebuilding.