Henry Noyes (1826-1917), the fourth of eight children and the oldest son of Enoch Noyes (1789-1877) and Clarissa Dutton (1799-1838), was one of several young Lyme men who caught “gold fever” and traveled to California in the mid 19th century. For this young farmer from rural Connecticut, dreams of making a fortune by mining gold did not pan out, but Noyes stayed in California for eleven years and earned a substantial income hunting and fishing. Few of Noyes’s letters home survive, but they provide tantalizing glimpses of his life in California, and his journal records the business details of many of his hunting ventures.

After President James K. Polk, in December 1848, confirmed the discovery of gold in the Sierra Nevada, the gold rush began in earnest, but adventurers on the east coast had no easy way to get to California. Traveling overland by wagon – the first transcontinental railroad was not completed until 1869 – took about half a year, and the trip was fraught with peril: difficult routes across mountains and deserts, the risk of cholera, and the threat of Indian attacks. Some booked sea passage for the 14,000-mile voyage around Cape Horn, which typically took five or six months and also presented challenges. Noyes’s friend Arthur Champion of Lyme, who crewed a ship around the Horn, wrote his sister from San Francisco in September 1853 that his ship had been stuck off the Cape for “thirty seven days with constant westerly winds with rain, hail and snow” and had suffered reduced water rations.[1] Noyes himself chose a third route, traveling by sea to Panama, hiking across the Isthmus, and then sailing on to San Francisco, arriving in 1850.[2] Although the Panama route was quicker than other options, it too was not easy. Panama travelers faced the hardships of sea travel and a thirty-mile trek through the jungle, encountered criminals, risked exposure to the dreaded Chagres fever, and chanced missing connections to vessels sailing up the Pacific coast.[3]

Not only was the trip to California long and difficult, it was expensive. For those traveling by sea, the cheapest berth cost $150 or $200 one way, and outfitting oneself for the gold fields required additional expense. For provisions and passage from New Haven, the typical cost was $500.[4] At a time when the average farm laborer in New England earned about $155 per year (with board), a journey to California could not be undertaken lightly, if it could be afforded at all.[5] Some men from Lyme found their way to California by working as crew members on vessels.[6] Others organized or joined mining companies that attracted investors to fund voyages.[7]

It is not known whether Henry Noyes traveled with other Lyme residents, but according to his journal and letters home, he worked with several of them in California. Enoch Noyes, Jr. joined his brother Henry in several western ventures. Noyes’s additional Lyme companions included John Lester, Erastus Huntley, Marcus Champion, and Horace Champion. Other contemporaries from Lyme also joined the gold rush, but their paths apparently did not cross with Noyes’s in California.[8]

Soon after arriving in San Francisco, Noyes and Horace Champion attempted gold mining, but, like many, they were disappointed. “Horace and I have come down again” from the mines to San Francisco, Noyes wrote his sister Martha in September 1850, “not finding room to lay a pick or shovel down without putting it on somebody’s head. The mining is completely used up,” and those who “could get home have gone while the rest are doing nothing.” Except for the “one in a thousand” who “makes his pile,” Noyes continued, miners’ efforts had “turned out a complete failure,” and men had lost their life savings and months of work building dams to sluice gold. “If you know of anyone that thinks of coming here give him a dose of Arsenic to start on. … I thunderingly hate to come home with out something, but I don’t see but I shall have to.”[9]

Noyes faced other adversity as well. He suffered illnesses[10] and complained of living conditions:

I like this country first rate but the fleas are so thick that you can take no peace at all. I have killed as many as 50 fleas in my pants just taking them off besides … thousands them of [sic] jump off before I get a chance to slay them. So for that very reason I couldn’t always stay out here. [11]

Noyes also apparently was swindled, writing his sister Martha in July 1852 that after encountering “dealing damn scoundrels” he had recently managed to get “just about square with the world again.”[12] How Noyes reacted to the physical violence and temptations of San Francisco is not known, but Lyme native Arthur Champion was shocked:

This is one of the most miserable places in the whole world, I believe. Last Sunday four men were stabbed around the docks where we lay. If a man is shot in the streets nothing is thought of it. Gambling houses are open Sundays as any other day. Horse races and cock fights always come off  Sunday. [13]

For his part, Noyes reported only minor indulgences. He wrote to his sister that “a gang of us” planned on “going to Santa Clara to a bear fight the 12 of August” 1852 (a Thursday), and he occasionally bought liquor.[14]

Noyes’s hardships paled in comparison to the tragedies that befell some Lyme men who ventured to California. Dr. Shubael Fitch Bartlett of Lyme died of dysentery in Benica, California, shortly after arriving there in 1849.[15] Edward Comstock spent seven months traveling around Cape Horn to California in 1849 and married there in 1854, but then suffered the deaths of his wife and infant child a year later.[16] Martin Huntley, who was born in Lyme before moving with his family to New Lyme, Ohio, in 1812, died on board a ship sailing from Panama to San Francisco.[17] Tragedy also struck Noyes’s friends. His 1850 mining companion Horace Champion, who returned home to Lyme and then headed back to California in 1853 as the captain of a ship, died at sea on his return voyage, from dysentery he contracted in San Francisco.[18] Erastus Huntley was murdered in lower California in 1862.[19] Marcus Champion, who teamed with Noyes in various endeavors, was killed in a steamboat explosion on the Sacramento River in 1865.[20]

Despite his personal tribulations, Noyes persevered, pursuing a variety of business ventures during his eleven years west. In 1852 he took a job on a large ranch harvesting grain and operating reaping and thrashing machines for $100 a month plus board, a handsome salary. Since “the rest of the men get 50,” Noyes wrote to his sister Martha, “you can see that old Hen is not quite so much of a stragler [sic] as [a] great many people took him to be.”[21] By mid 1852, Noyes had bought a half share of a shanty and a half share of a six-ton schooner named Mist.[22] Noyes planned to hire out the Mist to transport grain, and he reported some earnings from “freight,” likely from use of the schooner.[23] He also probably used the vessel in his wide-ranging hunting expeditions.

Most of Noyes’s considerable financial success came from hunting ducks to supply the San Francisco market. He teamed with different partners in different years to hunt waterfowl in the undeveloped marshes and streams around San Francisco Bay. To travel from one end of his duck hunting range to the other – from Suison Bay northeast of San Francisco to south San Francisco Bay – Noyes had to sail about 100 miles.[24] His earliest surviving business records, which he kept in a bound leather journal, detail his hunting locations and kills during five seasons (1855-1856 to 1859-1860), and summary accounts indicate that he started hunting as early as 1850.[25]

The San Francisco Bay wetlands were home to plentiful and varied waterfowl. On October 7, 1855, for example, Henry Noyes and two friends from Lyme, Marcus Champion and John Lester, shot 203 birds at Suison Creek, some fifty miles northeast of San Francisco. Their take included various species of ducks and geese, brant, curlew, teal, plover, and snipe.[26] Since each bird could be sold for about 30 cents, that day’s effort yielded $60.00. 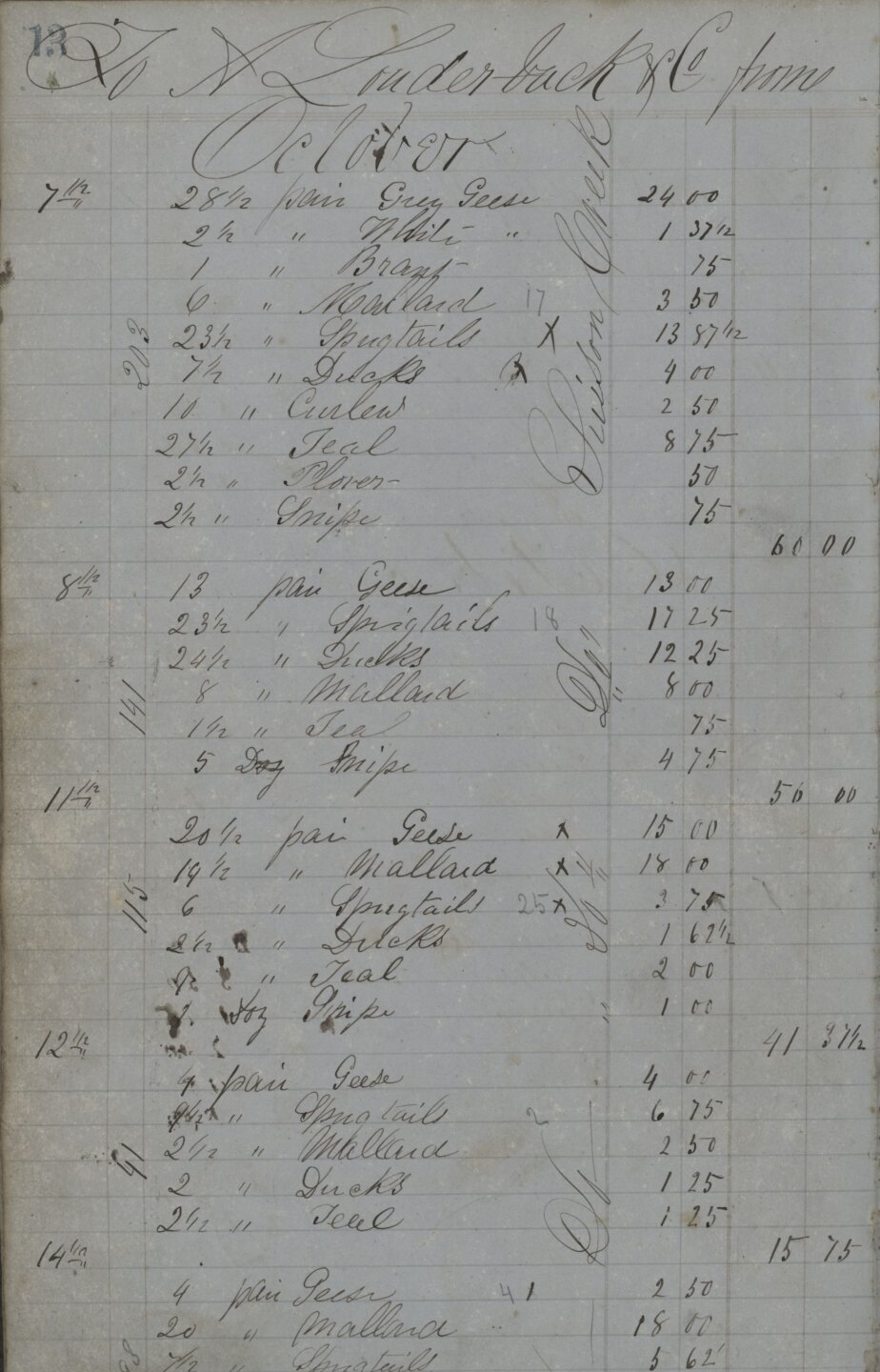 Noyes also reportedly hunted big game as well as ducks while out west, venturing as far north as Washington.[30] No records of any such shooting expeditions have been found, although he did kill a few animals while hunting ducks, and his journal includes a recipe for curing meat.[31] Since duck hunting season ran from late summer to early spring, Noyes may have spent time hunting game during the spring and summer. 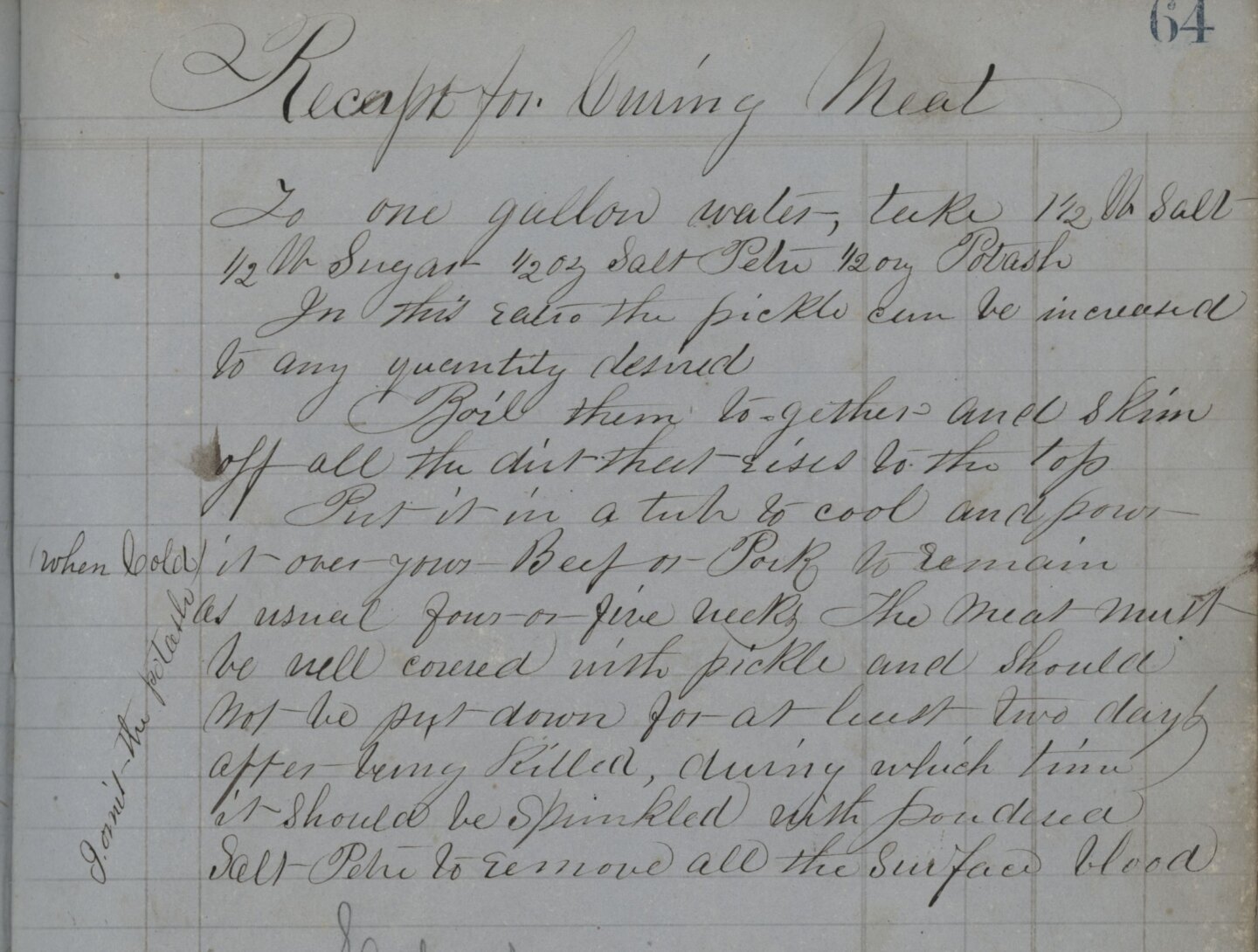 Noyes also made money fishing. On August 4, 1860, William F. Walton & Co. of San Francisco entered a salmon fishing contract with Henry Noyes, Enoch Noyes, and Judson Baldwin, a former duck hunting partner from Oregon. During “the coming fishing season” Baldwin and the Noyes brothers agreed to “devote[e] their full time and attention” to fishing for salmon, curing it, and packing and shipping it to San Francisco. For its part, the company was to supply equipment and fishing grounds on the Rouge River in Oregon and was to advance money for salting and shipping. The company would then sell the salmon on consignment and keep a percentage of net profits.[32] After this salmon fishing venture, Henry Noyes returned briefly to hunting before leaving California in 1861.[33]

The resourcefulness, resilience, and versatility that brought Henry Noyes success farming, hunting, and fishing during his eleven years out west also characterized his later years. On returning east he married his second cousin Mary Jane Ely (1838-1922) in Baltimore on November 19, 1861, and purchased a “fine farm” at Mt. Ararat in Cecil County, Maryland.[34] After the Civil War, he returned to his home town of Old Lyme, where he made his living fishing for shad, building boats, farming, and serving in various capacities in town government. 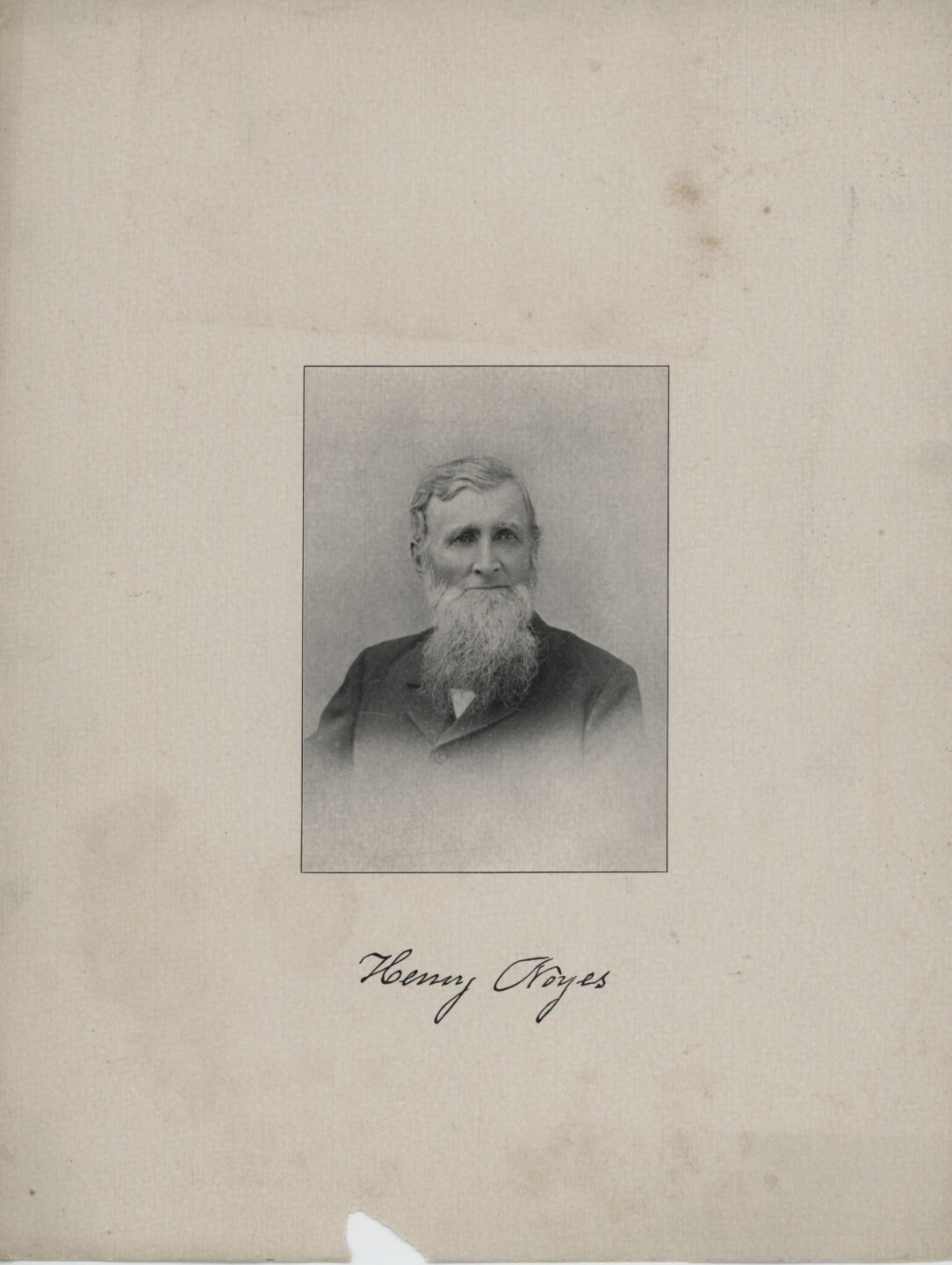 Although Henry Noyes did not rely on duck hunting as his profession in Old Lyme, he kept his hand in the sport. He taught his son Jack – John Ely Noyes (1862-1948), Mary Jane’s and Henry’s only child (and the author’s grandfather and namesake) – to hunt. A record titled “Lyme Ducks Killed in 1880 by J.E.N.” contains 45 entries, and underneath that list Henry Noyes noted, “9 of these ducks were killed by H. Noyes.”[35] 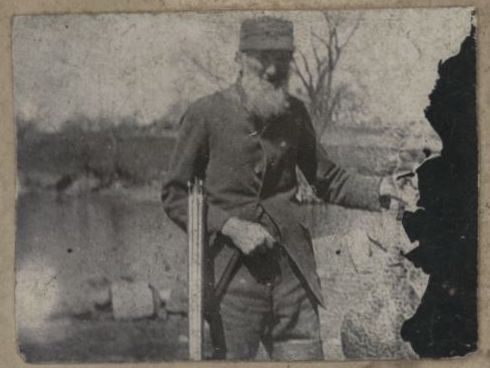 The author thanks Carolyn Wakeman, and Patrick Ford and Maribeth Quinlan of the Mystic Seaport Collections Research Center, for their assistance with research.

[7] Dr. Shubael Fitch Bartlett of Lyme, who traveled to California in 1849, served as the physician and treasurer of such a company. The New England Historical & Genealogical Register (1850), 4:195-196. Some mining companies sold shares to passive investors to raise money. Phyllis Kihn, “Connecticut and the California Gold Rush: The Connecticut Mining and Trading Company,” Connecticut Historical Society Bulletin (1963), 28:1-2. In addition, some ships transported goods to be sold in California.

[19] Huntley Genealogy, 1:249-250; Ivy Huntley Horn, John Huntley of Lyme, Connecticut and His Descendants (Herndon, VA, 1953), p. 158. Several men named Erastus Huntley were born in or near Lyme in the early 19th century, but Erastus Brockway Huntley (1829-1862) from Hamburg is the only one noted as having been in California. Although the references describe him as a whaler and a sailor, he appears likely to have been the Erastus Huntley who was one of Noyes’s hunting partners.

[22] Ibid. Noyes partnered with Marcus Champion from Lyme to buy the Mist, but Champion sold his share a year later. Letter from Henry Noyes to Sister [Martha], San Francisco, July 25, [1853], Noyes Papers Box, Noyes Correspondence files, Item 23, LHSA. Champion may well have owned the other half share of Noyes’s “shanty”; Noyes reported in his July 1853 letter that “I have sold my house.” Noyes may have bought another house later, since his journal records the collection of $30.00 for three months’ rent from Joseph Frost, another hunting companion, in 1858-1859. 1855 Noyes Journal, p. 77.