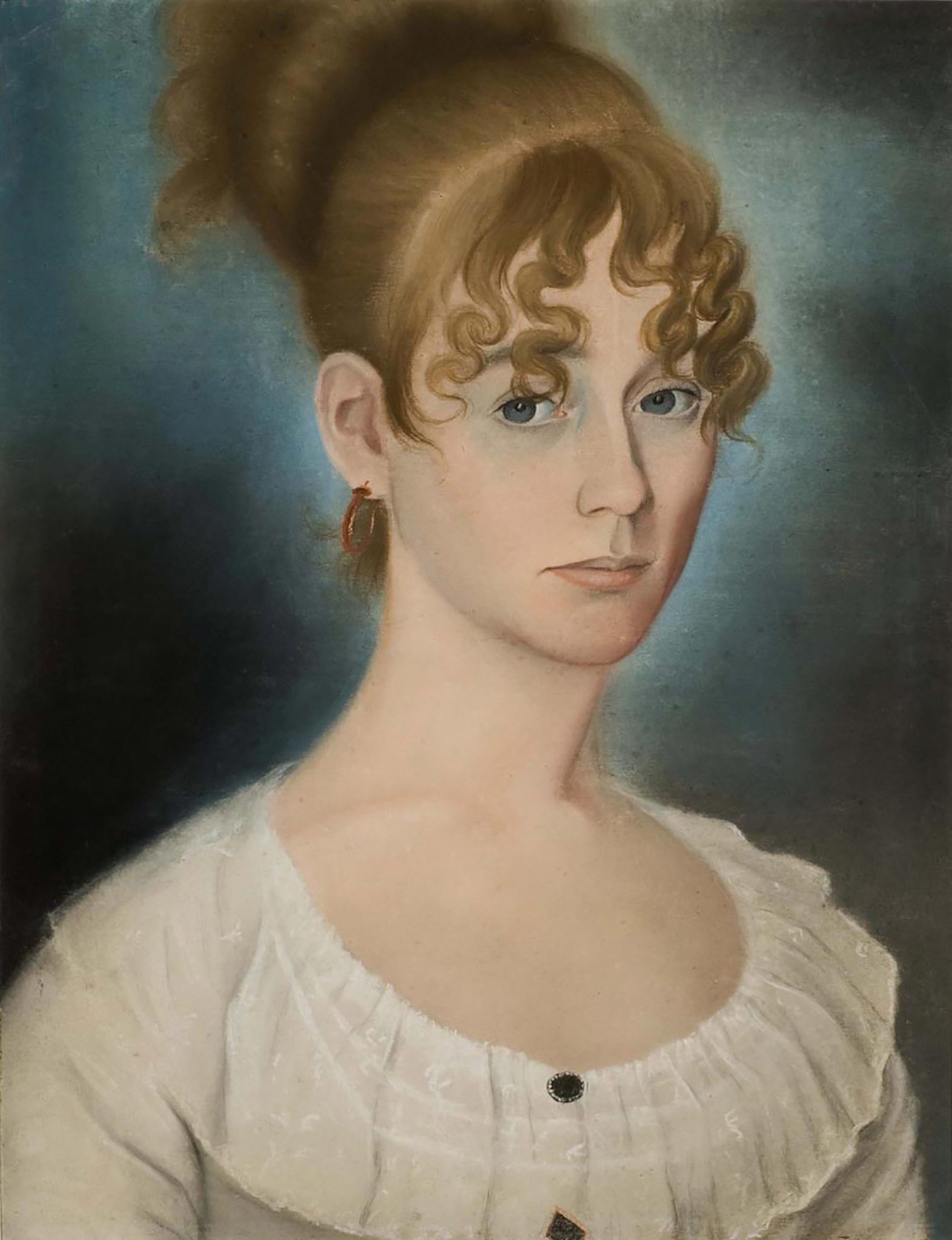 The pastel portrait of Abigail Leverett Noyes drawn by itinerant British artist James Martin ca. 1798 lets us picture a young woman from Lyme who moved as a bride to the Hudson River Valley. The marriage contributed one strand to an expanding web of connections linking Albany and Lyme.

Born in 1786, Abigail Noyes came of age during the period of economic recovery between America’s two wars with Britain when Lyme prospered as a center for shipbuilding and maritime trade. The Noyes family had been large landowners in town since 1666 when the church society offered extensive acreage and a dwelling house to Rev. Moses Noyes (1643-1729), the town’s first minister.[1]

bigail was the eldest child of Rev. Noyes’ great-grandson. Named for the current minister’s wife,[2] she grew up surrounded by relatives in the section of Lyme known as “Noyestown” and most likely attended the village school. She had a younger sister Catherine who died at age seventeen and a younger brother William[3] born in 1792. She was 21 when she left her family behind and married John Lee Sill (1787-1852) from Albany.[4] 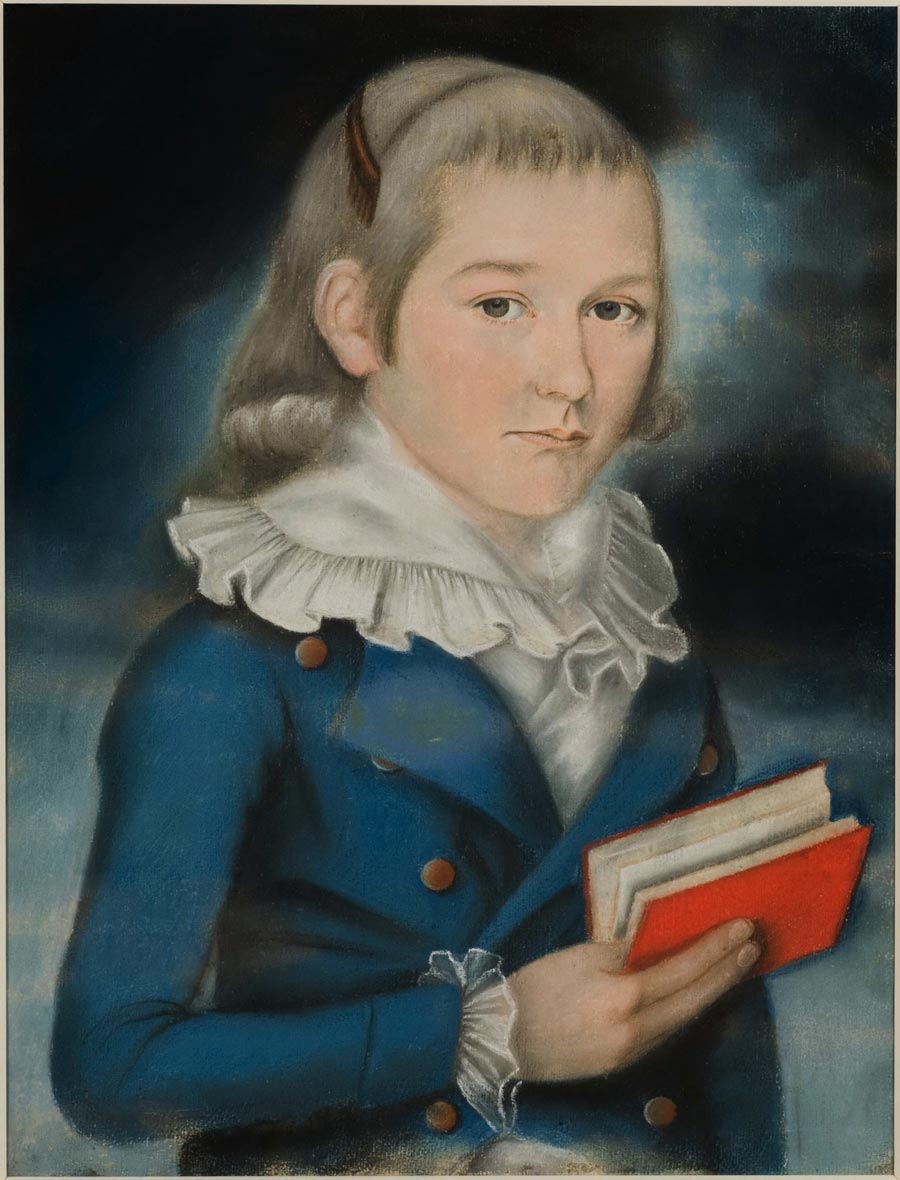 Abigail’s husband had close ties to Lyme. His father Richard Sill (1755-1790) grew up in “Silltown,” half a mile from her home, and graduated from Yale in 1775 with her father’s brother. After distinguished service in the Continental army, he clerked in the Albany law firm of Aaron Burr, a fellow officer. In 1785, the same year Abigail’s parents wed in Lyme, he married Elizabeth Nicoll, daughter of a prominent New York landowning family descended from the Van Rensselaers. 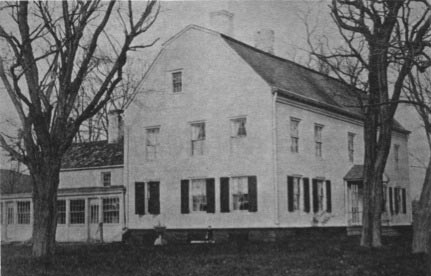 Five years later Richard Sill succumbed to tuberculosis. The Albany Gazette called his death “a public misfortune, as well as a most distressing loss to an amiable and disconsolate wife and two lovely infants.” When his widow quickly remarried, her father Col. Francis Nicoll (1737-1817) took charge of the children.

William Nicoll Sill (1786-1844), the older son, remained with his grandfather in the Nicolls’ grand mansion house (now Bethlehem House) overlooking the Hudson River. John Sill spent much of his boyhood on the estate of his grandfather’s sister Elizabeth Nicoll Glen, whose marriage to a wealthy landowner near Albany had produced no children. In 1804 the Sill brothers traveled to their father’s birthplace to meet their Lyme relatives and may also have met their future wives. Four years later William and John both married Lyme women.

Abigail’s marriage had an auspicious beginning. John Sill, said to be a cultivated man who enjoyed books and music, had graduated from Willliams College in 1807. According to the Sill genealogy, he engaged in various commercial enterprises and made at least two trips to England, Scotland, and continental Europe. Abigail soon had two sons.

No one knows what prompted John Sill to move from Albany to Lyme in 1815. Despite outstanding customs debts in Plattsburgh, New York, he appeared confident of his financial prospects and soon engaged master architect Samuel Belcher to build a gracious home for his family in Noyestown. 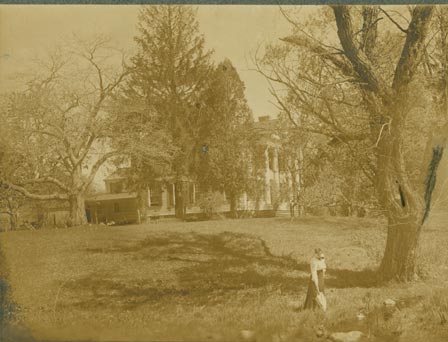 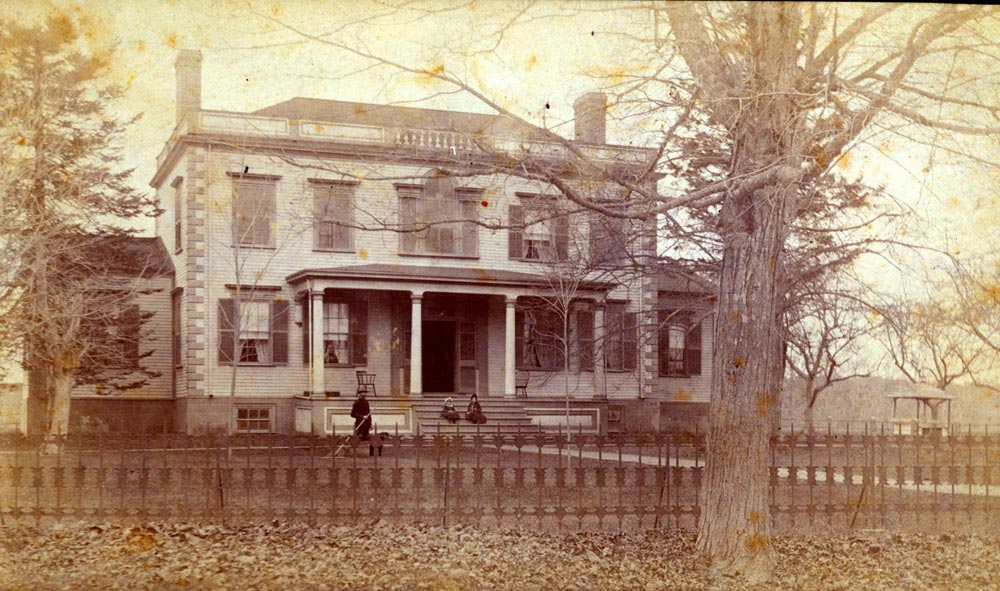 Col. Belcher was busy in Lyme in 1817. Already at work on a stately new meetinghouse beside the village green, he also designed an elegant residence for Abigail’s brother. While William Noyes’ mansion house (later the Florence Griswold Museum) replaced their father’s century-old dwelling, the Sill house (later the Lyme Academy College of Fine Arts) occupied an adjoining plot of Noyes land.

But Abigail’s comfortable life in Lyme did not last. By the time her home was completed and furnished in 1818, her husband’s mercantile activities had raised serious legal issues. According to local tradition, a hidden closet in a second-story cupboard of the Sills’ new home concealed smuggled silks, satins, and laces.

A court hearing in New Haven in 1816 had already decided: “against the said Sill for the sum of $9,000 in a suit on a bond for duties due at the custom house for the District of Champlain in the State of NY.” Respected Lyme attorney Charles Griswold (1791-1839) defended John Sill in court and Abigail’s brother pledged financial support, but the legal entanglements dragged on for a decade.

To cover his debts, Abigail’s husband began liquidating his Lyme assets. On April 8, 1819, he sold to William Noyes for $1,000 the land on which his house stood. On April 24, 1819, he sold for $1,050 to Nathaniel Matson two tracts of land near Silltown with a dwelling house and blacksmith shop. On February 7, 1820, he sold to William Noyes for $3,000 his home and its outbuildings. But the proceeds covered only half his debt, and the New Haven district court issued a warrant for the arrest of John L. Sill.

Finally Abigail’s husband sold the contents of their house and barns for $950 to her cousin Dr. Richard Noyes (1787-1864) who lived nearby. That bill of sale, signed in New Haven on September 20, 1820, suggests that John Sill was already in jail or under the custody of the court. Abigail’s home soon emptied. The inventory of her furnishings speaks of a life of refinement in Lyme that quickly unraveled. 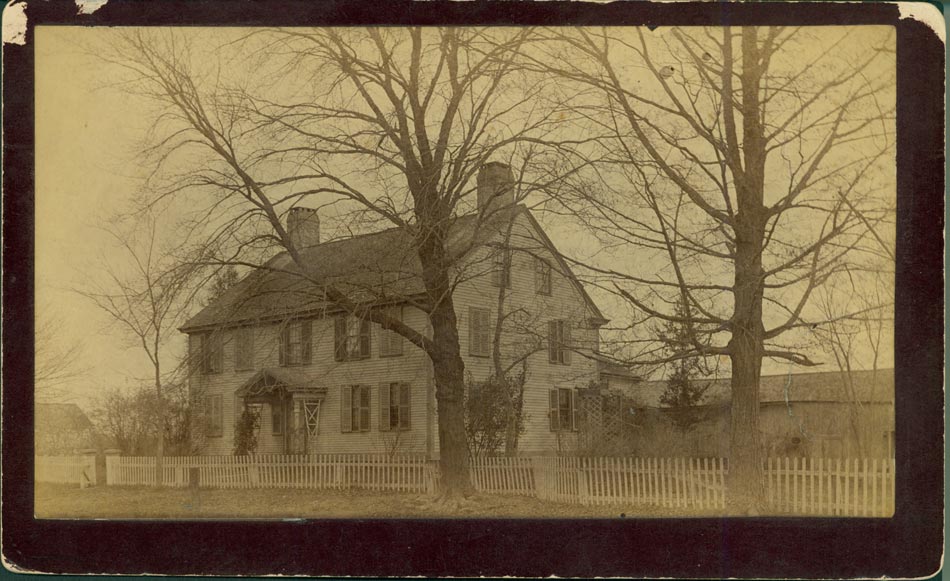 Among the items John Sill sold were “all my books as now in my library and alcove” and Abigail’s monogrammed silver marked ALN. The inventory also listed four gilt-framed mirrors, a mahogany bedstead, three washstands, one work stand, one sideboard, one tea table, one dining table with ends, two bureaus, twenty three chairs, one case of drawers, two knife cases, two globes, one carpet, one china dining set, one tea set, one set china jars, one clock, one trunk of linens, a variety of kitchen furniture, and “other articles belonging to me and being part of the furniture of the house formerly occupied by me. Also one sleigh and horse cart.”

A family story tells of John Sill’s release on bail from the New Haven jail and of secret visits to his wife in Lyme. At night under cover of darkness a fresh horse was said to carry him to Saybrook. According to tradition, Richard’s brother Enoch Noyes (1789-1877) watched for a lantern signal, then rowed Abigail’s husband across the Connecticut River and up the Lieutenant River to the Sills’ landing. After a few hours at home, John would return by the same route to New Haven before daybreak.[6] However fanciful the anecdote, Enoch named his first child, born in 1821, Abby Sill Noyes.

Because William Noyes had signed a bond as additional security for his brother-in-law’s debts, he was held responsible in successive court documents. In 1824 the charges against him were finally dropped after he appeared in person in Hartford to plead before the court. By then he had sold Abigail’s home to a young lawyer from Lyme named Charles J. McCurdy (1797-1891).

The circumstances of John Sill’s release from custody are not known, but the family genealogy claims he spent his later years in feeble health in Port Chester, New York, and died there in 1852. The same account places Abigail in Newark, her mother’s birthplace, in 1859. By then she was 73 and alone. Her two sons and only grandchild had died before her husband. 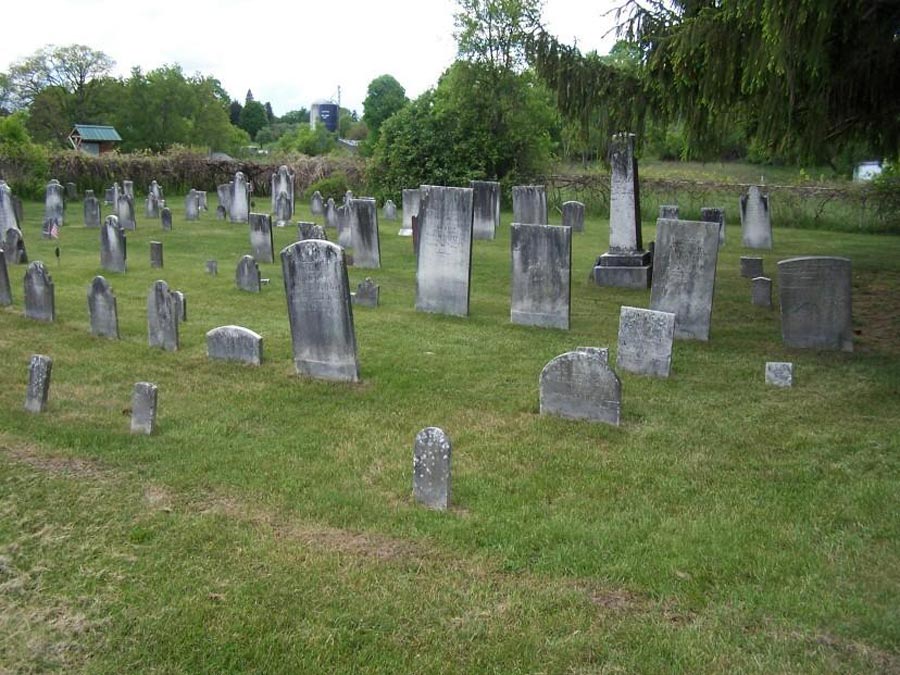 [2] When Rev. Stephen Johnson (1724-1791), Lyme’s minister for forty years, returned in 1776 after serving as an army chaplain during the Battle of Bunker Hill, he brought with him in a fancy carriage his third wife, Abigail Leverett of Boston.

[3] The Florence Griswold Museum is home to four remarkable pastel portraits of members of the Noyes family by James Martin.

[4] Biographical information, property transactions, and details from legal documents, unless otherwise noted, are drawn from unsorted research notes gathered over many years by Susan H. Ely and Elizabeth B. Plimpton, who intended to write a book called First Families of Lyme. The book was never completed, but the Ely-Plimpton Papers are preserved in the Lyme Historical Society Archives (LHSA).

[7] Photographs of the historic Nicoll-Sill cemetery