The Green Shadows Inn, called simply Green Shadows, started in 1923 as a seasonal, summertime inn and tea room in a house on Joshuatown Road beside the Eight Mile River. The name references the green shadows of the rustic landscape that were reflected in the river. As its popularity grew, Green Shadows moved in 1929 from Joshuatown Road to a ramshackle farmhouse in Hamburg, the village center of Lyme. No heat, no electricity, no problem! Cream from the resident cow could be churned by hand and lowered in the well to be kept cold. When a guest from California inquired about a room and there were none available, a two-room cottage was built in a week for her. There was nothing not possible at Green Shadows.

Lyme was (and still is) the more pastoral, rural cousin to the town of Old Lyme. While Florence Griswold’s home formed the heart of the Lyme Art Colony, about two dozen artists purchased homes in Lyme. The Los Angeles Sunday Times on September 24, 1911, quoted California landscape painter Frederick Roland Miner as saying: “Old Lyme has been painted so much that so many of the painters are seeking other fields. . . .William S. Robinson told me that he was on a number of New York juries, and that when he saw pictures of the old bridge that crosses the Lieutenant River…he knew at once that some amateur had sent it in as the professionals had quit painting that subject long ago.”

Marguerite Slawson joined this migration to Lyme. Born in Eau Claire, Wisconsin, in 1893, she graduated in 1915 from the University of Wisconsin with honors and a B.A. in physical education. Never married, Miss Slawson enjoyed a teaching career that posted her in the Midwest and on the east coast. During the fall semesters of 1920-1923, she came to Connecticut College to teach hockey and soccer. A scenic drive through Hamburg in 1921 with a friend, Charlie Martin, who was born in Lyme, captured her interest. When the hockey and soccer seasons ended, she moved back to the Midwest to teach physical education at Tudor Hall School for Girls in Indianapolis. Eventually this became a full time teaching post, but she always returned to spend summers in Lyme. In 1923 she and fellow Connecticut College teacher Marion Colby rented a house on Joshuatown Road and acted on a notion to open an inn/tea room, which they named Green Shadows. 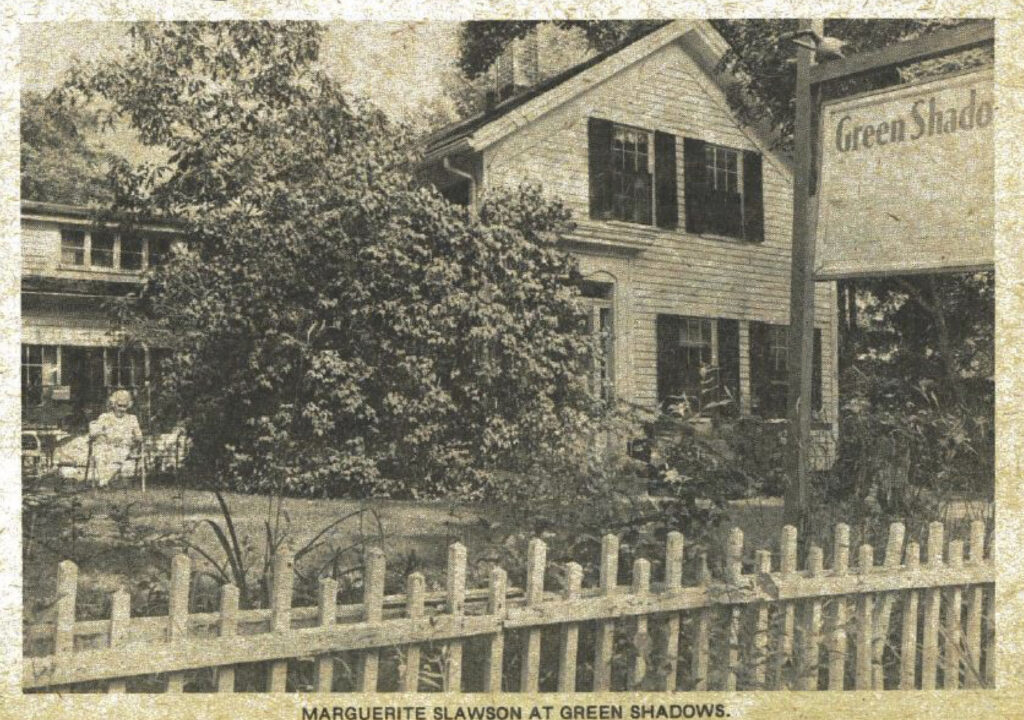 Photo of Marguerite Slawson at Green Shadows from the article by Charlotte Ryerson, “When Green Shadows was a Quiet Unhurried Inn”, The Gazette, July 21, 1977

With success running a seasonal tea room, she must have sensed an opportunity to make Green Shadows a year round enterprise. In 1929 she took $900 in savings and purchased the summer home of sculptor Alexander Phimister Proctor on Route 156. Tapping into the desire of city folks to visit an idyllic country setting made recently accessible by car, she established a permanent home for the inn. Initially it was a summertime business only, but in 1938 she took a leave of absence from teaching and opened Green Shadows year round. 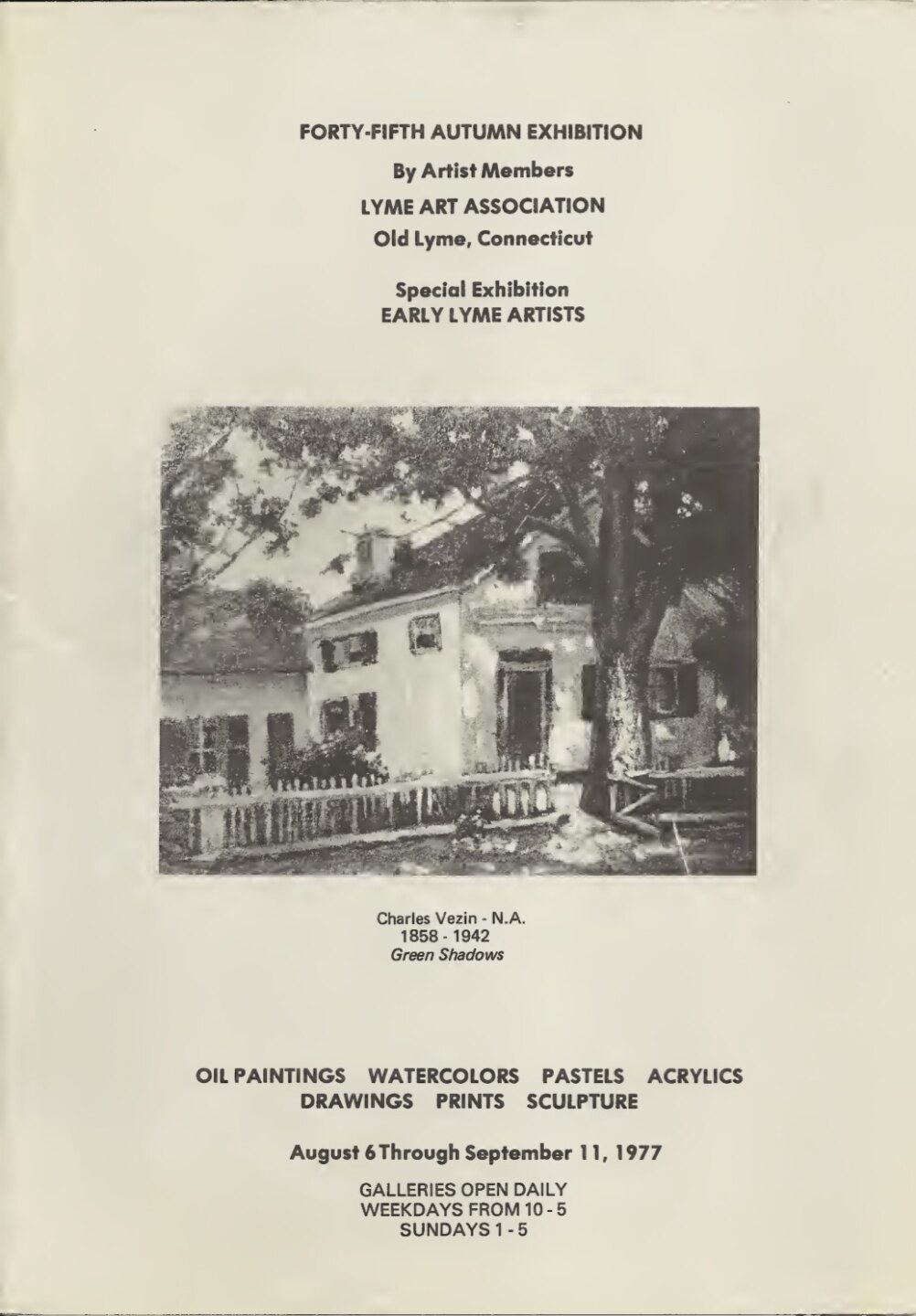 Lyme Colony artist Charles Vezin remained an ardent fan of Green Shadows from its inception as a tea room on Joshuatown Road. Vezin lived nearby and gifted Slawson with a painting of the new Green Shadows Inn soon after its move. The diminutive canvas hung in a place of honor above a fireplace at the inn for many years. It is now in the collection of the Florence Griswold Museum. A second painting by Vezin was loaned by Slawson and exhibited at the Lyme Art Association in 1977.  Other paintings decorating Green Shadows included works by Harold Saxton Burr and Winfield Scott Clime. Another artist with whom Slawson associated was Guy Carlton Wiggins. In the summer of 1921 she and her friend Marion Colby stayed at Wiggins’s home  on Mount Archer Road, in exchange for preparing meals for the students at the Guy Wiggins Art School. Later she purchased a house from Wiggins that she added to her list of rentable properties.

While “cozy” and “casual” described the accommodations that Slawson offered her guests, it was her home-cooked meals that kept folks coming back. Rev. C. Brandt Tefft of the First Congregational Church of Lyme included a reference to the “wood fires and succulent odors of Green Shadows” in a sermon delivered in 1976. Slawson purchased a farm on Forsythe Road in Salem to provide whatever could be grown locally to keep her kitchen well stocked. Guests could help with meal preparations, and they actively sought out these chores, which enhanced their rustic country experience. “The guests always had five choices of vegetables from the garden, and one thing they liked was that they could have all five choices if they liked…And of course there was fresh milk and cream from Suzy (the cow).” Five desserts were always on the menu, and a cookbook published in 1982 by the ladies of the First Congregational Church of Lyme includes several of her recipes, including her specialty, Lemon Chiffon Pie, a popular dessert in the 1920s.

Slawson served her bountiful dinners to 40-50 folks a day at the peak of the inn’s popularity. Articles in local newspapers The Pictorial and The Gazette included recipes for her special dishes, like Knock Your Socks Off Soybean Casserole, Chicken à la Green Shadows, and Deep Oatmeal Pie. Another “Green Shadow Special” received frequent mention, “a huge helping of homemade ice cream on cake smothered with chocolate sauce.”

As a person of local interest, Miss Slawson was often mentioned in local newspapers. The New London Day often reported the innkeeper’s social activities: “Miss Marguerite Slawson entertained the minister and his wife Mr. and Mrs. Wayne Rollins of the Yale Divinity School at her home Green Shadows.” The local columnist also noted her attendance at luncheons for the Ladies Benevolent Society and Lyme Grange dinners, her election to various food committees, and her travel to the Springfield flower show, as well as other trips she took by airplane or automobile. Also mentioned were her membership in the Republican Caucus and the Lyme Library Reading Group, as well as the various awards she received for handicrafts and baked goods submitted to local fairs. Every reference included a mention of Green Shadows, as her name and her inn became synonymous and legendary. 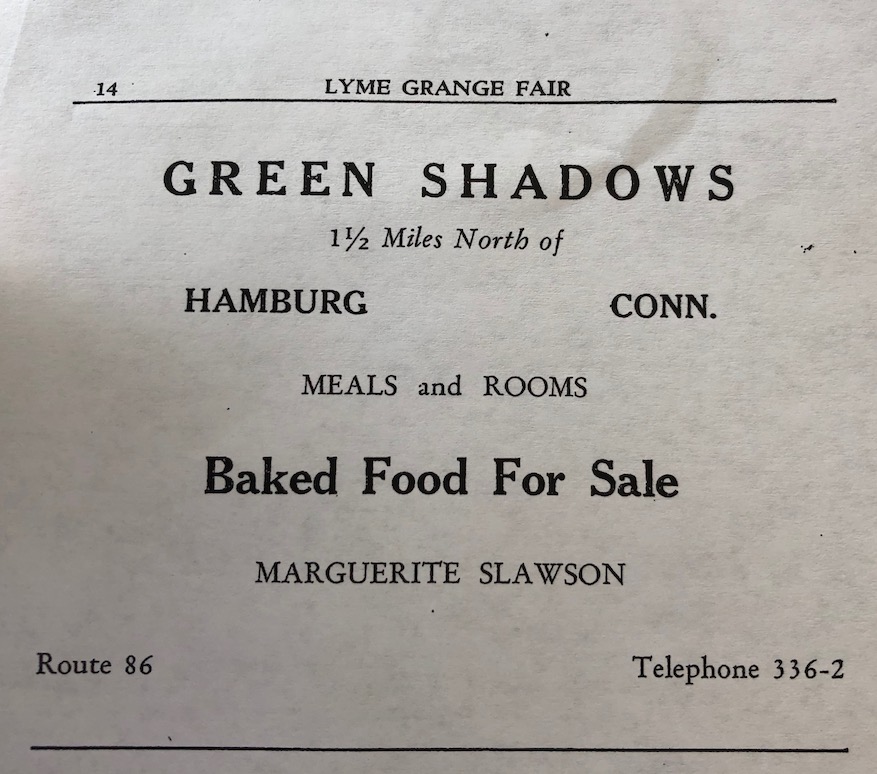 The Lyme Grange was an especially important social organization in the rural community, and members gathered regularly for conversation and meals. Slawson often attended, as did many of her patrons, and she also hosted “dessert card party” fundraisers for the Grange at Green Shadows. A number of artists who called Lyme home and partook of many meals at Green Shadows were also Grange members. Wilson and Lydia Irvine, Guy and Dorothy Wiggins, Oscar and Mabel Fehrer, Edward Volkert, Will and Augusta Taylor, Charles Vezin, and James and Laura Weiland, all joined the Lyme Grange, where they shared stories about rural pasttimes and about their work and travel.

A small sign “Green Shadows” still hangs on the property in Lyme once owned by Marguerite Slawson, who died in 1984 at age 90. Probate records show she was comfortably well off. Included in her estate were a stock portfolio, several mortgages held for local folks, some sources of rental income, and many generous bequests to friends and organizations. The Green Shadows Inn was a profitable business endeavor that allowed her to live out her life as she determined to, but it was also a mecca of hospitality. Now, almost 40 years after her death, many in Lyme still remember fondly the rustic country inn.

Special thanks to Ann Brubaker, archivist assistant of the Lyme Local History Archives, for her exceptional research assistance.

See also, listings for Green Shadows in automobile travel guides such as Hotel and Motel Red Book. The inn offered valet service and picked up guests at the nearby train station in Old Saybrook, also at the boat landing in Hamburg Cove.